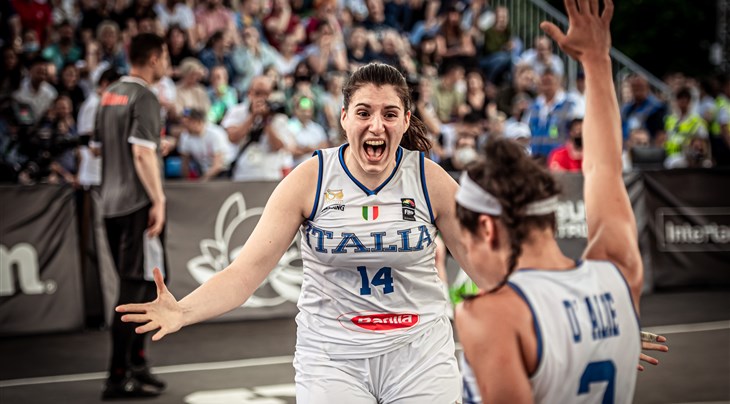 CONSTANTA (Romania) - For some of the world's most talented young 3x3 players, it all comes down to the show stopping FIBA 3x3 Nations League Final 2022 in beautiful Constanta on September 14-16.

Let's take a closer look at all the main details as Constanta gets ready to host yet another five-star event.

Where can I watch the FIBA 3x3 Nations League Final?

Who is competing in Constanta?

There are 12 men's and 12 women's teams competing in Constanta.

The Spaniards flexed their muscle like Carlos Alcaraz at Flushing Meadows by knocking out mighty France, Germany and the Netherlands in the Europe West conference, while the lethal Lithuanians enjoyed the comforts of home to top the Europe East conference.

Sniper Rokas Maciulis was colder than a Lithuanian winter and if he turns into 'Mr Freeze' in Constanta then Lithuania will be hard to stop.

Japan will enter with plenty of swagger after a devastating run at the (U23) Asia conference, while a slew of U21 teams will be keen to show off their talent, including No.1 seed Mongolia, Lithuania , France and Israel who again boast the dangerous one-two punch of sniper Yonatan Levy and Gill Noyovitch.

In the women's, we just have to start with France, who are looking for another title in their golden year having already captured the Crelan FIBA 3x3 World Cup 2022 and FIBA 3x3 Europe Cup 2022.

But it certainly won't be a breeze for France with the Next Gen of women's 3x3 incredibly deep.

You can make legitimate title cases for Italy, China - whose women have already medalled at the 3x3 World Cup 2022 and FIBA 3x3 Asia Cup 2022 - and hoops power USA, who went 18-0 in their conference.

There will be more stars than at the Emmys and we just have to start with Japanese sensation Ryu Watanabe, who is always up to something crazy on the half court.

Don't believe me then just check this out from the Asia Conference.

Israel dynamo Shoham Gat is a player you just can't take your eyes off because this 20-year-old has an array of sick inside and outside moves to be a certified bucket getter.

Another prodigy is France U21 sharpshooter Lorenzo Thirouard, who might need to cool down in the Black Sea because this dude can get scorching hot in an instant.

In the women's, towering Italian Sara Madera was impossible to stop in Conference competition with a staggering 9.3ppg as she fights for the crown with a number of other contenders.

Asia Cup 2022 gold medalist Kun Huang and the towering Mingling Chen (6ft. 4, 1.92m) make a formidable duo as they lead China's charge, while France's Emma Peytour might be the next big thing having starred on the FIBA 3x3 Women's Series 2022.

And you know where phenom Victor Wembanyama learned his moves? From his older sister Eve Wembanyama with the 20-year-old set to dish up a storm for France U21's talented team.

The list goes on and on but we'll name drop just one more in Alyssa Ustby, who showed her hops in the Dominican Republic. Next thing you know she might be done with dunking in practice, and ready to yam on people in an actual game...

The FIBA 3x3 Nations League Final is organized by the Romanian Basketball Federation, together with Sport Arena, and is supported by the Constanta City Hall and CSM Constanta.