Everything you need to know before FIBA 3x3 AmeriCup 2022 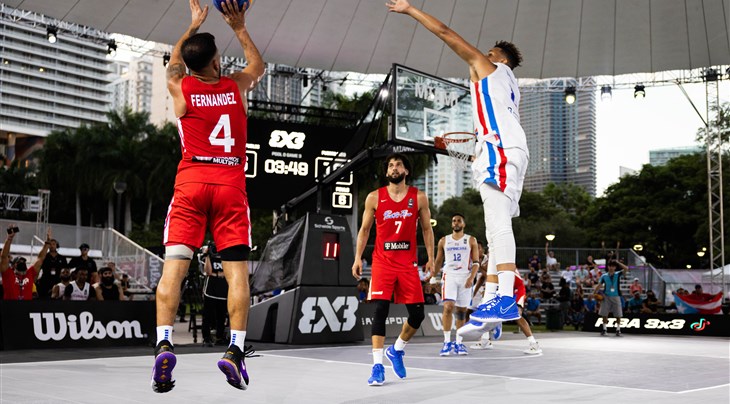 MIAMI (USA) - The biggest party in world famous Miami over the next few days will be at the FIBA 3x3 AmeriCup 2022, which is set to be non-stop entertainment featuring the best players fighting for continental bragging rights.

After such a memorable first edition 12 months ago, the sequel is set to be bigger and better than the original so let's look at all the key details.

There are a whopping 31 teams – 18 in the men's and 13 in the women's – competing just outside the FTX Arena, which is the home of three-time NBA champions Miami Heat.

Of course, we just have to start with defending champs and host USA who have brought absolutely loaded squads in both categories.

In the men's, get ready for 'Jimmermania' to sweep Miami because former NBA player and college legend Jimmer Fredette will be showing he can ball on the half-court as he makes his 3x3 debut.

But don't expect USA to just walk away with the gold because other teams are coming for their crown.

No.2 seed Puerto Rico, an OG in3x3, have memorably returned the last couple of years and want to cap their stunning comeback with a medal in Miami after missing out in the first edition.

Competition will be tough with a formidable Canada aiming to flex their muscles having also missed a medal last year. Stacked with players who have starred over the years on the FIBA 3x3 World Tour, they might just be singing Oh Canada! when it's all said and done.

Last year's silver medalist Brazil and bronze medalist Dominican Republic, who shocked the world, will arrive in Miami with good memories and a swagger.

It's much the same in the women's with most expecting the final between friendly neighbors USA and Canada. It's easy to see why with both teams boasting 3x3 wonder women and a gold medal decider would be crazy but let's not get ahead of ourselves just yet.

After all, Brazil lit up AmeriCup 2021 with a silver medal but they'll have to do it the hard way through qualifying. Don't count them out because they've got their star player, powerful Sassa returning after her team of the tournament selection last year.

You want dark horses then Puerto Rico, Dominican Republic and Chile won't be fearing anyone so don't be surprised if they go on giant-killing runs.

Pitbull. Mayweather. J-Lo. Miami is home to many celebs, but the biggest stars in Southern Florida in the coming days will be at FTX Arena. Where should we start?

Fredette will, of course, get plenty of attention with his crazy legion of fans sure to tune in, but those watching for the first time will have their jaws dropped when they see the crazy athleticism of Kareem Maddox.

USA's not the only one with stars with Puerto Rico boasting big fella Luis 'Pela Coco' Hernandez, who is an absolute monster on the glass. Speaking of brutes, Canada have their own with Bikramjit Gill - better known by his popular nickname 'the Bearded King' - a dunking machine who can heat up from behind the arc. In other words, a defender nightmare.

While young gun Lucas Thiebaut is the main man for Chile and there might be a weather warning in Florida when he arrives because the 23-year-old can make it splash on the half-court.

In the women's, we'll have to start at the top. That's right, world No.1 Michelle Plouffe who has had a year for the ages and she can cap 2022 in style by leading Canada to glory.

To do that, she'll have to make the paint once against her playground but it won't be easy with rivals going for her crown. WNBA player Lexie Hull is just 23 but her game is totally mature as she proved at the FIBA 3x3 U23 World Cup 2022, where she led all players in scoring in USA's silver medal performance.

You want a breakout star then it might just be Puerto Rico's Annelisse Vargas, who had a taste of the big time 12 months ago and likes a mean crossover.

When she's feeling it, the 25-year-old can splash from the logo, so defenders should be warned - don't leave her open.