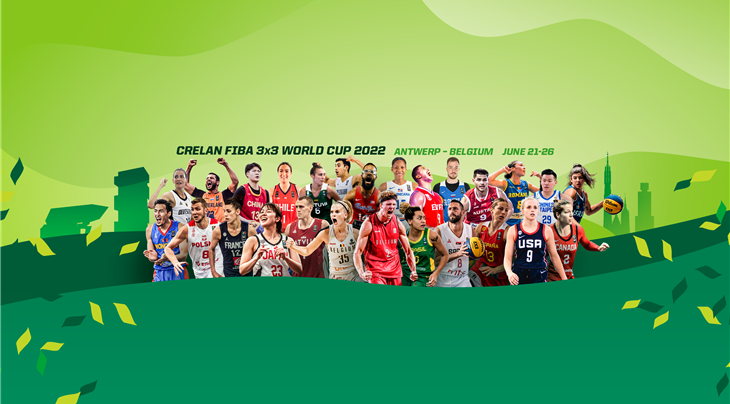 ANTWERP (Belgium) - This season's biggest spectacle has almost arrived with the Crelan FIBA 3x3 World Cup 2022 set to end a three-year drought of the top national team event in the 21-point game.

There are 40 teams arriving in Antwerp hoping to be crowned world champions and their dreams will be on the line from June 21-26.

The action runs from June 21-26, and you can follow it live on TV and on social on the FIBA 3x3 YouTube, Facebook, Sina Weibo and Douyin pages, not to forget the FIBA account on Twitch.

There are a whopping 40 teams – 20 per gender – competing in Belgium.

The 40 teams qualified thanks to being host (Belgium), winning the Olympic tournament (USA's women and Latvia's men), the position of the national federation in the 3x3 Federation Ranking at the cut-off date (November 1, 2021 in this case) or winning the FIBA 3x3 World Cup Qualifier Asia.

In an unpredictable game, where 25% of the games are decided by just one single basket, perhaps predictions are pointless. But let's be good sports and give it a go.

In the men's, No.1 seed Serbia just have to start favorites as they aim to build on their remarkable record of four titles from six previous World Cups and a Serbian team has won the first two Masters of the World Tour season.

Serbia are the frontrunners but there are too many other contenders to name. Latvia won 3x3's Olympic debut in Tokyo last year. Team USA just have to be given a shout out as the reigning champs although this team has had a makeover from the line-up who created history three years ago in Amsterdam.

But the red, white and blue always have talent to burn and this is no exception with Princeton dynamos Dominique Jones and Kidani Brutus a deadly one-two punch from the perimeter and if they get hot then 21 points will be struck quicker than chanting U-S-A.

Host Belgium have the comforts of home but will that be a curse? No host has won the title in World Cup history and the Belgians have struggled for a breakthrough triumph on the World Tour.

But you wouldn't want to dismiss this emerging power who have achieved so much in the past 12 months and are determined to put on a show for their home fans.

Their superstar Thibaut Vervoort can absolutely be the best player every time he steps out on the half court as he enters his World Cup debut determined to become a hometown hero.

In the women's, Olympic gold medalist Team USA will be out to reclaim their dominance of the World Cup having had a barren run since winning in 2012 and 2014.

They have a different squad to the WNBA stars who memorably won gold in Tokyo, but nonetheless have talent and swag in equal doses. It's a well-balanced squad featuring young gun Hailey van Lith ,who was MVP of the U18 World Cup in 2019 and 3x3 OG Cierra Burdick, who won the World Cup in 2014.

USA might have the firepower but No.1 Germany has the consistency and chemistry to deserve top billing. They also have the top women's player Sonja Greinacher and are on a roll having won the Women's Series opening stop in Tel Aviv after a breakthrough season last year.

Other contenders include reigning champs China, who always rise on the big stage and European superpowers France and Spain, who combined to win the last 3x3 Europe Cups.

We can't list them all otherwise this would turn into a novel. But here's a sample. In the men's, there is the high-flyer Strahinja Stojacic from Serbia who became No.1 and came out of his famous brother's shadow to earn his own nickname - 'Dr Strange'.

His partner in crime Dejan Majstorovic remains 3x3's 'Maestro' having claimed his latest award with an MVP at the Manila Masters. He might be in career best form and will be shooting for his 4th World Cup title.

If you want a buzzer beater than Latvia's Nauris Miezis always wears the cape when the game is on the line but Vervoort has become a challenger for the crown of 'Mr Clutch' having melted down Tokyo during heroics at last year's Olympics.

There are plenty of wonderwomen in Antwerp and we just have to again mention Greinacher, who is the best two-way player in 3x3. China's Lili Wang wears No.23 for good reason because she plays like she's the GOAT when feeling it. She was the joint top scorer at the Tokyo Olympics.

No list is complete without Laetitia Guapo, who has done it all in 3x3 including being No.1 for a long period of time. The one thing missing is a World Cup crown with powerhouse France having won bronze three years ago and Guapo will have to be at her best to lead a youthful Les Bleues to the podium.

That's not even in question. A better question is probably this: How will you get anything done during those six days?

If the in-game dunks, ankle-breakers, no-look dimes and buzzer beaters don't do it for you...