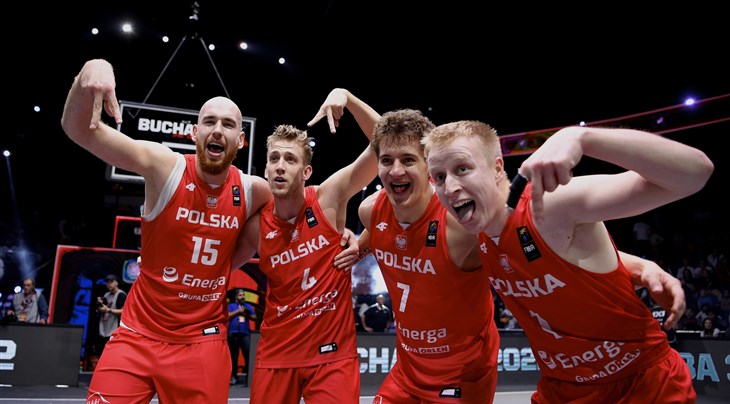 Let's relive all the drama that took place in the 3x3 mecca of Bucharest.

Poland have nerves of steel

No.7 seed Poland made a major statement from the get-go when they beat title fancies France in a thriller but then lost to Brazil in a tight finish. It started a trend where Poland's games were all close bar their pool game against Ukraine.

After squeezing past the Netherlands in pool play, Poland's confidence rose in the clutch as they beat China in the quarters then overcame No.2 seed Lithuania in the semis after star Mateusz Szlachetka outplayed bucket-getter Eimantas Zilius.

Even though they had proven to be cold-blooded, Poland were in a major hole in the final against Serbia and blown away by hot two-point shooting from sharpshooter Nikola Kovacevic and Aleksa Stojanovic.

Down 20-15, Poland were just about down and out but MVP Szlachetka inspired a miraculous rally capped by an insane buzzer beater to lift his team to the title against all the odds.

Sniper Szlachetka was the Pole who stole the show with 53 points in 7 games, but he had plenty of support from 7ft. 1in (2.15m) giant Adrian Bogucki who was unstoppable around the rim.

First-time champion Poland's 3x3 future looks very bright and they will have a chance to defend their title at home as Lublin hosts the 2023 edition.

France add another title to 2022 collection

It's been an utterly dominant 2022 for France's women who added more silverware after taking home the title. This season they had already won the Crelan FIBA 3x3 World Cup 2022, Europe Cup, Nations League Final and U17 Europe Cup but clearly weren't satisfied.

As they showed in the Nations League Final, France's U23 squad is special and they have an embarrassment of riches. France were in cruise control until the semis, where they squeezed past Netherlands, before setting up a blockbuster final against mighty USA.

The hoops power had a deadly line-up filled with WNBA players, but MVP Anna Ngo Ndjock transformed into a Wonder Woman on the half-court with a crazy 14 points, including four two-pointers to almost single-handedly take down USA.

The 5ft. 10in (1.79m) walking bucket warmed up Bucharest with a sizzling shooting display to ensure France's golden year continued.

Speaking of French talent, Lorenzo Thirouard-Samson was lights out to help France win another medal with bronze in the men's.

The high-flying Thirouard-Samson was named MVP in the Nations League leading to much hype over the 21-year-old, who did not disappoint in Bucharest to finish as the leading scorer.

He was a consistent bucket-getter and almost unstoppable when splashing from deep. Thirouard-Samson was electrifying and the bandwagon is surely full now. There was a lot of anticipation over the 23-year-old, who was selected sixth in the 2022 WNBA Draft. The 6ft. 1in (1.85m) Hull was even better than advertised as she dominated the scoring charts with 63 points from 7 games.

She created a heat wave through pool play highlighted by a 15-point binge against a strong Japan team. Hull slowed down a little in the business end, but her contribution was unforgettable and she finished in the Team of the Tournament.

USA might have walked off disappointed at missing the gold, but Hull can hold her head up with pride knowing she gave it everything she had.

Romania's capital has a long love affair with 3x3 and Bucharest always delivers as host. This was no exception with the iconic Bucharest Metropolitan Circus fueling incredible energy from passionate 3x3 fans.

It was an unforgettable event that adds another chapter to 3x3's rich history in Bucharest.