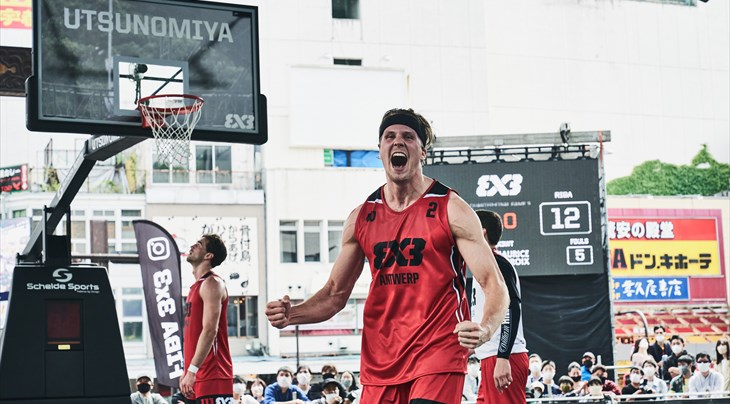 MIES (Switzerland) - 3x3 stars shone brightly in 2022, so let's look back at eight who defined this incredible year.

We just have to start with the No.1 player in the world. 'Doctor Strange' dominated the 3x3 multiverse in 2022 with a trio of Masters MVPs and being the main man for Ub Huishan NE, who finished at the top of the FIBA 3x3 World Tour 2022.

The eye test showed that the 30-year-old was a walking bucket who could slither to the basket, but also pop from the logo if he wanted to. The stats confirmed what we watched with the 6ft. 6in (1.98m) athletic marvel leading most of the major categories, including overall scoring.

He was also a key part of Serbia's continual domination of international play with Stojacic winning golds at the Crelan FIBA 3x3 World Cup 2022 and FIBA 3x3 Europe Cup 2022.

There is no doubt that Stojacic wears the crown and you better watch out because he intends to keep it.

2022 will always be remembered for Stefan Stojacic's amazing comeback, where he returned from a serious knee injury to light up the World Tour.

The former Liman star reminded everyone that he might be the best pure shooter 3x3 has ever seen as he torched opponents with an insane average of 7.8 ppg.

Stojacic's heroics inspired Vienna's rise to the World Tour's top tier. Before his arrival, the talented Austrians were a notch below the elite but Stojacic's experience and class has taken them to another level.

We can't wait to see if 'Mr Robot' can continue to be rebooted, but until then let's appreciate Stojacic's ability to defy medical logic and provide so many unforgettable moments.

'Must See TV' was better than advertised after a starring role in 2022, where his second season exceeded the hype.

His crowning moment was winning MVP at the Debrecen Masters, where his masterpiece was a 9-point haul punctuated by the Maurice Lacroix buzzer beater to end Ub's incredible Masters win streak and clinch Antwerp's first triumph on the World Tour.

No one had more buzzer beaters in 2022 than the 24-year-old, whose jumper is sweeter than Belgian waffle. Still not yet in his peak, Vervoort is surely the best player under 25 in 3x3 and he's poised to dominate the game in the years ahead.

'Robin' had to be the lead superhero for the first half of 2022 and he helped steady the ship for Riga. Once his partner-in-crime Karlis Lasmanis returned, Miezis was relieved of the burden and spectacularly unlocked.

He was brilliant in tandem with Lasmanis as Riga unleashed an incredible 27-game win streak.

With insane handles, scoring binges and continual daggers, Miezis appeared to have 3x3 superpowers, which is fitting for this Latvian caped crusader who just keeps getting better.

It was quite obvious how much Riga missed Lasmanis. They were competitive but no longer a force on the increasingly congested World Tour.

But when 'Batman' returned Riga went on a tear and won three Masters with the 27-year-old better than he's ever looked in his already legendary career.

Lasmanis averaged a dizzying 8.5ppg -which is something like 50 a game in basketball - and it was quite clear that this bucket getter just can't be stopped no matter the defensive scheme.

But at season's end it was 'Doctor Strange' who had top billing and universally regarded as the game's best but you just know that will make Lasmanis more determined to grab the crown he feels belongs to him.

You know how great 'The Maestro' is? Before his arrival, Ub - formerly Vrbas, -couldn't get it done even though they had Strahinja Stojacic and Marko Brankovic.

Majstorovic brought across his winning ways from Novi Sad to turn Ub into the baddest and best team on the World Tour. He made those guys better and he hasn't missed a beat himself with this spectacular Serb still the best shooter on the planet.

He saved his best for his beloved Serbia with MVPs at the World Cup and Europe Cup to become the most decorated international player in 3x3 history.

This Princeton duo keep flying the flag for the red, white and blue. They won their second straight gold for mighty Team USA at the FIBA 3x3 AmeriCup 2022.

Maddox has long been the best player in the USA and an important advocate for 3x3 in the hoops mad country. He keeps representing the USA with pride as he showed to win another gold in addition to his triumph at the FIBA 3x3 World Cup 2019.

Barry, the son of NBA legend Rick Barry, was also part of that memorable triumph three years ago but he had his finest moment in 3x3 at AmeriCup 2022, where he took home the MVP after leading the scoring.

With Maddox and Barry as frontmen, American 3x3 is in good hands.

The best newcomer? It surely has to be Worthy de Jong, who lit up the World Tour and instantly made new kids on the block Utrecht a contender.

The 6ft. 4in (1.93m) high-flyer made social media melt with his ridiculous moves filled with posterizers, sick dimes and impossible shot making.

With a taste of 3x3, which is perfectly suited for this natural entertainer, de Jong should be better for the experience and ready for a sustained run at the crown.

As we already know, this flying Dutchman is most certainly worthy of your attention.