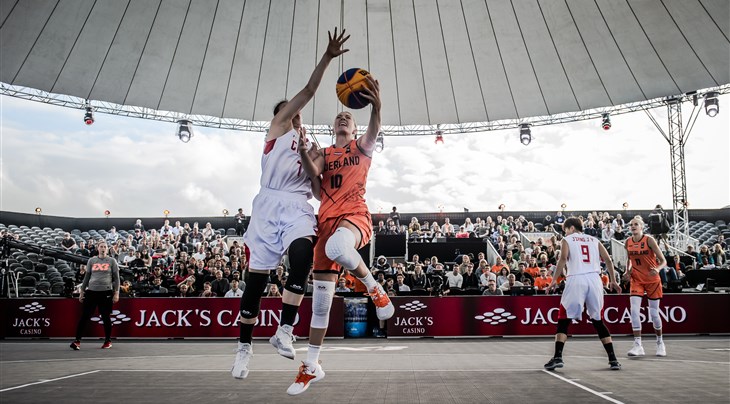 ANTWERP (Belgium) - There is a major question causing anxiety for nervous local fans ahead of the FIBA 3x3 World Cup 2022 on June 21-26.

Can the hosts be the most? Belgium, particularly their spectacular men's teams who are deemed strong contenders, will be leaning on their passionate fans and home comforts for an edge. But does home court advantage equal winning medals?

We dug into the the World Cup history books to find out.

Greece have yet to be particularly successful in 3x3 - they are seen as a potential sleeping giant - but their men's team were rated a huge chance at the very first World Cup in Athens in 2012.

But they missed the podium all together and their campaign ended with a Greek tragedy and a 1-point loss to eventual runners-up France.

Greece women's team were not expected to contend as the 16th seed and that eventuated with the host finishing eighth after winning 3 of 7 games.

This is the most successful haul from a host in World Cup history with Russia men's winning bronze, while the women's claimed silver.

Perhaps they acclimatised better to the incredibly humid conditions in Moscow during the tournament in June 2014, which still gives those who competed there nightmares.

The men's team were the 18th seed but were boosted by the rowdy fans as they stormed through the competition, including a 21-3 thrashing of Argentina. Hopes were high for a gold medal but they faltered against reigning champ Serbia in the semi-final.

In a silver lining, they claimed bronze after a thrilling 19-18 win over Lithuania where perhaps the home comforts and loud fan support in the packed bleachers got them over the line.

Their women's team went one better and were in absolutely awesome form throughout in one of the most devastating runs seen at a World Cup.

In seven of the eight games leading up to the final, Russia held opponents to 11 points or less with mean defense straight out of the textbook.

But unfortunately their poor shooting froze Moscow temporarily as they ran into mighty USA, whose 2014 super team might be the most dominant women's side seen at a World Cup.

Still, Russia's silver medal is the best feat by a host nation so far and capped a very successful World Cup for the locals.

This was not a good tournament for host China, whose men's team went winless over four games and were statues against the athletic marvels from the USA, who were shaking the rim like it was a dunk contest.

China's women fared better winning 3 of 4 games with their only loss against eventual champ Czech Republic, but they unluckily did not progress further. It meant a tough time for the fans who turned out in huge numbers in this most memorable World Cup.

China's women's turn came later when they won the World Cup in 2019 and a bronze medal at the Tokyo Olympics two years after that.

France men's clearly enjoyed lighting it up at home as the 10th seed made a surprising run to finish on the podium. Led by sharpshooter Angelo Tsagarakis, France dazzled and put on a show to storm into the semi-final, where they were outgunned by mighty Serbia.

But they edged Slovenia to win bronze and provided cheer for the local fans who had been disappointed with their highly rated women's team exiting early.

Losses to Switzerland and Spain meant the No.2 seed fell at the pool play to continue a hit and miss success rate for hosts during World Cups.

As the 19th seed, little was expected of the Philippines men's team but they fed off the incredible atmosphere from their amazing fans, who were at fever pitch when the Filipinos shocked the world by beating No.3 seed Russia and No.6 Brazil.

Unfortunately, it wasn't enough to get through a powerful Pool C but this was a great example of a team feeding off the energy of their home crowd and rising to newfound heights.

But the Philippines women's team couldn't quite raise their game in a winless campaign although they were competitive against some of the best teams in the business and Janine Pontejos won gold at the mixed shoot-out contest.

There was a lot of expectation on the men in orange after the Netherlands were runners-up at the previous two World Cups. But the pressure proved too much for the Netherlands, who were unable to get out of pool play after losing in a heartbreak to eventual champs USA.

It was a similar disappointment for the women, who were fancied with the brilliant Bettonvil sisters hoping to paint Amsterdam orange.

But eerily like their male counterparts, the Netherlands lost by just 1-point to eventual champs China to fall in pool play as the Dutch were not the hosts with the most in Amsterdam.

So, overall, hosts netted just one silver and two bronze medals from six World Cups. It's been mostly a curse with the pressure so intense that host nations often crumble.

Belgium's teams in Antwerp will be hoping history doesn't repeat.