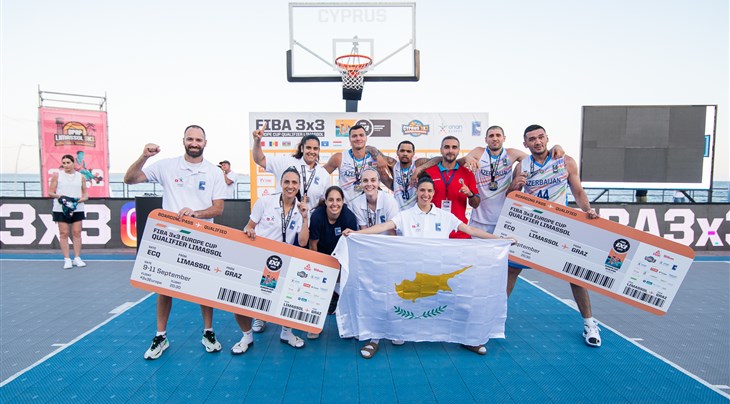 LIMASSOL (Cyprus) - Azerbaijan's men and Cyprus' women qualified for the FIBA 3x3 Europe Cup 2022 after winning the Cyprus qualifier in Limassol on June 4-5.

In the women's category, hosts Cyprus defeated Luxembourg 15-12 in the final to qualify to the 3x3 Europe Cup for the first time ever. Their top scorer - 21-year-old Eleni Pilakouta - was named MVP of the women's competition after scoring 23 points in 4 games. In the men's category, 8 years later, Azerbaijan will also make their return to the 3x3 Europe Cup after claiming the Cyprus Qualifier. Led by the competition MVP, Jordan Davis, who scored 30 points in 5 games, they defeated Ireland 20-16 in the final. Both teams have qualified to this year's FIBA 3x3 Europe Cup on September 9-11, 2022, which will be played in Graz, Austria. In accordance with Art. 73 of the FIBA Internal Regulations, the Qualifier in Limassol was reserved exclusively to the teams of National Federations of the C/D-group.