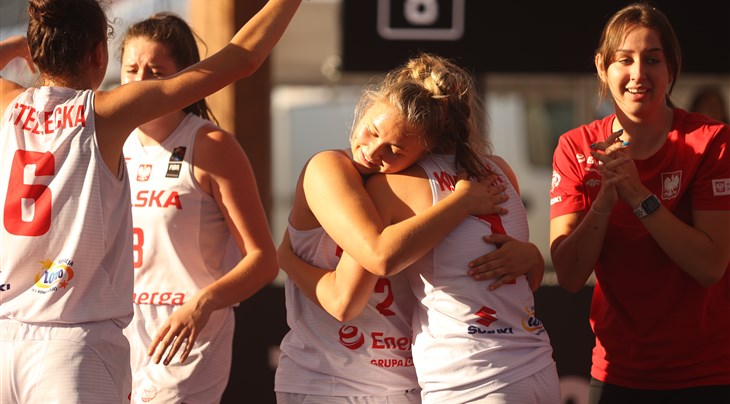 SZOLNOK (Hungary) / VOIRON (France) - The next generation of 3x3 stars showcased their talent during the FIBA 3x3 U17 Europe Cup Qualifiers in Szolnok, Hungary, and Voiron, France, on August 6-7 as coveted spots for next month's big spectacle were locked up in thrilling fashion.

During the two-day action-paced events, a slew of countries booked their tickets in style to the FIBA 3x3 U17 Europe Cup in Athens on September 2-4.

In Voiron, Croatia's men started with a tense 21-19 victory over rival Serbia and that victory fueled an unbeaten run, alongside Israel who also won all three games. France and Turkey joined them after winning their quarter-finals. It took Poland two more games to secure the last ticket, after beating Czech Republic and Portugal.

In the women's category, Czech Republic and France were unbeaten with comprehensive campaigns to signal an ominous warning ahead of Athens. Slovenia and Poland joined them after winning the second vs. third in the pool final games.

There were some insane finishes but none better than Poland's women securing their spot in absolutely crazy fashion to break the hearts of Turkey.

In Szolnok, Germany, Latvia, Lithuania and Ukraine qualified early in the men's draw, while Estonia had to win two additional games, including a 12-11 nail-biter against Sweden to earn their ticket to Athens.

In the women's category, Lithuania showed why they're becoming an absolute 3x3 superpower by being the only country (in Hungary) to qualify both their teams to the U17 Europe Cup.

Lithuania women will be joining the men at the #3x3U17 Europe Cup! 🇱🇹 pic.twitter.com/zoJ1JFq3I3

Lithuania and Sweden qualified by winning their pools while Hungary and the Netherlands had to win one more game to go to Greece.

The new breed of 3x3 stars provided a glimpse of the future and they are ready to deliver on the big stage in Athens next month.