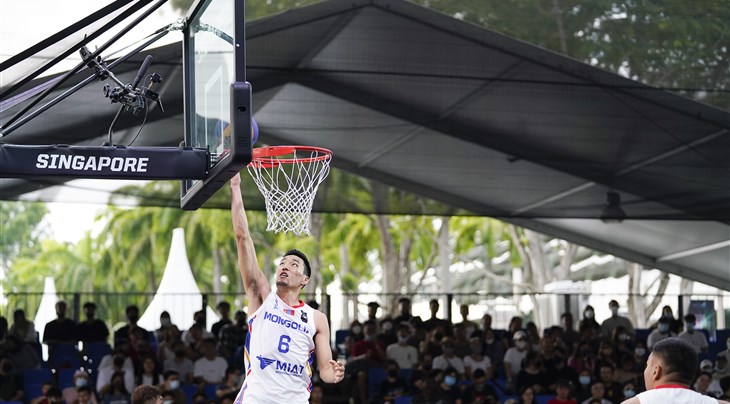 SINGAPORE - China (women's) and Mongolia (women's) ended the pool play in style on Day 4 as the knockout stage excitingly looms at the FIBA 3x3 Asia Cup 2022.

China were the headline act in the women's and were joined in the quarters by Australia, Mongolia and surprise packet Thailand. In the men's draw, No.1 seed Mongolia made it through along with Korea, impressive China and the Philippines.

It means China (women) plays Thailand in the quarters, while Mongolia and Australia meet in a blockbuster. In the men's, Mongolia face the Philippines, while China take on Korea.

The fifth edition of the Asia Cup, the first since 2019, is being played in the surrounds of the world famous Marina Bay Sands. Crelan FIBA 3x3 World Cup 2022 bronze medalist China showcased why they love the big stage so much on Day 4. They were far too strong against an in-form New Zealand before facing a major test against defending champs Australia in what could be a preview of the final. An energetic China, however, shut down new-look Australia's firepower to record a big victory and issue a warning to the competition as the 3x3 power seek a first Asia Cup title.

Mongolia are the No.1 seed but top billing doesn't seem to have affected them after comfortable Ws over Korea and three-man India, who were shorthanded after an earlier leg injury to star Vishesh Bhriguvanshi.

Their in-form players have had plenty of action on this season's pro circuit so far and showcased plenty of swagger ahead of the knockout stage. China dynamo Lili Wang was unusually quiet first up against New Zealand but you just knew the scoring machine would bounce back quickly.

The 29-year-old did exactly that against Australia to be the best player on the half court filled with stars.

The No.23 cut through the Aussie defense to finish with a game-high 9 points but her energy was also evident defensively as she caused nightmares for her opponents highlighted by a couple of huge blocks.

Delgernyam Davaasambuu remains the heart and soul of Mongolia as he produced a heroic display against India, where he scored 12 points and grabbed 8 rebounds.

He was too strong for an undermanned India and there isn't much anyone can do when he's feeling it from deep with Davaasambuu nailing four 2s, including the punctuation point in a performance worth a flex.

Day 4 started with a bang in the opener as Mongolia's women were pushed to the limit by Thailand, who impressed during qualification with a win over the Philippines.

Underdog Thailand's confidence rattled the No.1 seed, who made Singapore unusually cold with their wayward shooting. But the Mongolians hit back through star Khulan Onolbaatar who dominated the boards.

The teams couldn't be separated after regulation but Mongolia scored two points in OT to break the hearts of Thailand, who rebounded quickly to upset Uzbekistan in another thriller and book their spot in the quarters.

The Asia Cup heats up on the fifth and final day with the knockout stages.