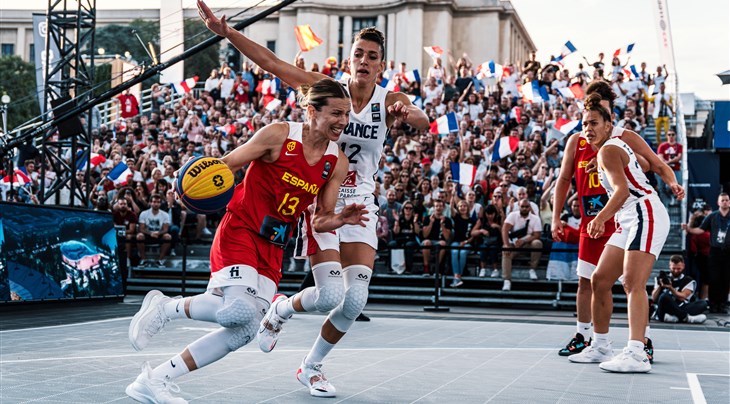 ANTWERP (Belgium) - The best teams in the world are ready to descend on Antwerp for the showpiece FIBA 3x3 World Cup 2022 on June 21-26 and that means a renewing of iconic rivalries.

Here's some of the best 3x3 rivalries that might square off in the showpiece event of 2022.

Riga from Lativa has been the team in recent years consistently challenging 3x3 powerhouse Serbia, whose top teams Novi Sad, Liman and Ub have dominated the FIBA 3x3 World Tour.

Riga's awesome foursome - who became Olympic gold medalists - came of age in 3x3 as newcomers in 2017 when Latvia shocked the world by beating mighty Serbia in an OT semi-final classic at the FIBA 3x3 Europe Cup 2017.

That stunning result fuelled a memorable rivalry which has caused tension between the teams with the Latvians desperate to take the crown from the Serbians.

Unsurprisingly, these two great 3x3 nations bring the best out of each other with Serbia winning the re-match in a 1-point thriller in the final of the FIBA 3x3 Europe Cup 2018.

And they squared off in another classic at the semi-finals of the last World Cup in 2019 with Latvia prevailing 22-19 to end Serbia's bid for a fourth straight crown.

The names might be a little different in Antwerp, but rest assured the contest will be just as legendary if these two epic rivals meet again.

No one will ever forget the all-time classic final between these two mighty hoops nations at the FIBA 3x3 World Cup 2016 - arguably the greatest 3x3 game ever played.

Watch it full below if you've somehow forgotten or are a 3x3 newbie.

There's always some extra spice whenever they step on the court with Serbia having set the standard in 3x3 and USA keen to catch up. But Serbia once again proved masters in the rivalry after knocking out USA at the quarters of the World Cup in 2017.

Sick of coming up short, a determined USA came out swinging against their nemesis Serbia to start the World Cup in 2019 and finally collected the W.

The confidence gained was a springboard for USA ending their World Cup title drought and there will be many 3x3 fans hoping the teams once again renew hostilities in Antwerp.

The neighbors enjoy a natural rivalry across sports and that friendly fire has translated into 3x3 with both countries rising towards the elite category in 3x3.

Amsterdam and Antwerp were two of the surprise packets in 2021 and that led to the teams meeting numerously on the pro circuit.

And they've brought the competitiveness to the international level with the foes meeting on the biggest stage of all. And they did not disappoint at the Tokyo Olympics with Belgium winning a thriller 18-17 over the Netherlands in an indication of what might lie ahead in Antwerp.

And you can just bet the local crowd in Antwerp will be just a little bit louder when their heroes face the men in orange. When Julian Jaring's free throw knocked out USA from their Olympic dream in Graz, the Netherlands celebrated like it was New Year's Eve.

You couldn't blame them because the small nation had upset the hoops superpower in a result that melted down social media.

But 3x3 OGs weren't really that surprised because we know results are as random as Facebook friend suggestions and also remembered that the Dutch beat USA easily at the World Cup in 2017.

USA did get theirs at the World Cup in 2019 but only just in a 15-14 thriller. It's perhaps an unlikely rivalry, not built on traditions but through tough battles on the half court.

You just know these two Asian superpowers will produce heated contests. They've had huge battles over the years in the FIBA 3x3 Women's Series and Asia Cup.

But it was China who had the biggest bragging rights of them all after winning a close one at the Olympics over host Japan during the pool play.

It was part of China's brilliant bronze medal run on the back of winning the World Cup 2019 to cement their status as the cream of Asia.

Japan will want to knock China off their throne and they get a chance with the rivals set to meet in a Pool A blockbuster in Antwerp.

These European powers have some of the best women 3x3 players in the business and that equals A+ quality when the teams square off.

We'll never forget their epic at the World Cup 2017 when Spain won a thriller but France turned the tables to win gold at the FIBA 3x3 Europe Cup 2019.

It was just one of several gut punchers for Spain, who fought harder than Julianna Peña to emotionally claim the FIBA 3x3 Europe Cup 2021, where they beat France in the semis to silence the crowd in Paris.

USA and France were trendsetters in women's 3x3 from the beginning with the Americans creating history with a thrilling 17-16 victory to win the first ever FIBA 3x3 World Cup in 2012.

France have continued being a 3x3 power and been a force on the Women's Series but have repeatedly fallen short against their kryptonite USA, who won twice at the Tokyo Olympics including a tough 18-16 semi-final victory en route to the gold medal.

You want more? Then buckle up because these two behemoths are in for a titanic battle in Pool B action in Antwerp.

A new exciting rivalry emerged late in last year's Women's Series when No.1 Germany and women's power Canada met a trio of times.

Canada had the edge 17-15 in a quarter-final heart-stopper in Montreal and then lay the smack down with a convincing victory in the pool stage of the showpiece Bucharest Final.

But the Germans gained their revenge in the decider as a rivalry was formed and it will go into overdrive if they clash in Antwerp.