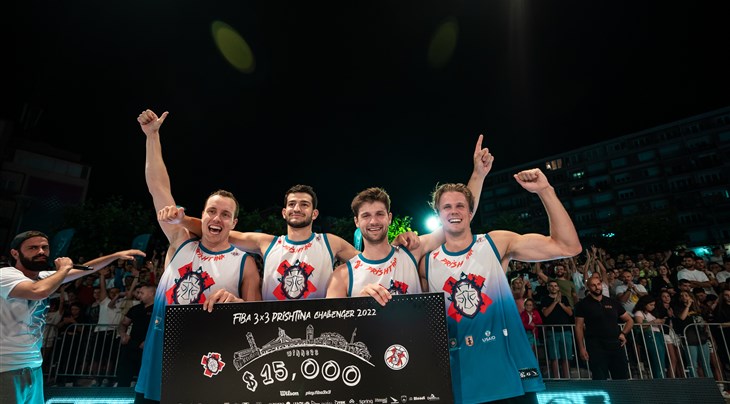 PRISTINA (Kosovo) - A confident Antwerp (BEL) continued their winning ways after taking out their second consecutive pro circuit title with a thrilling triumph at the Pristina Challenger on July 16-17.

On the back of claiming the Bordeaux Challenger, the brilliant Belgians proved irresistible with a perfect run in Pristina but were pushed to the limit by surprise packet Fribourg (SUI) in an incredible final.

They were: No.1 in Most points scored, Best shooting value, Most highlights and Fewest points allowed.

Be warned everyone. Antwerp have that winning taste and they like it! After so often falling short on the pro circuit, the world No.3 have secured back-to-back titles to prove they are the biggest challengers to Serbian powerhouses Ub Huishan NE and Liman Huishan NE.

In Pristina, No.1 seed Antwerp shot the lights out but also played mean defense as they reached the semi-finals without breaking a sweat.

A 21-9 beat down of highly-rated Ulaanbaatar MMC Energy (MGL) in the quarters was particularly impressive but Antwerp were finally pushed in the semis by a Stefan Stojacic-led Vienna (AUT) before surviving a thriller in the final against Fribourg.

Thibaut Vervoort took somewhat of a backward seat in Bordeaux to emerging star Caspar Augustijnen but 'Must See TV' regained his status as the hottest show around with an insane performance in Pristina.

The 24-year-old was deadly with a leading 46 points from 5 games, including a sizzling 41% from deep.

He formed a deadly one-two punch with his partner-in-crime Nick Celis, who finished with 27 points including the title-winning bucket to finally end Fribourg's resistance.

With the World Tour about to resume, Antwerp are confidently eyeing their first ever Masters title and one suspects their breakthrough victory is coming sooner rather than later. 3x3's depth has really grown in recent times and we can add Fribourg to the list after the 11th seed came within an inch of a stunning title following a giant-killing run in Pristina.

The Swiss started with an OT victory over star-studded No.3 seed Jeddah (KSA) before beating Ulaanbaatar MMC Energy to cap an unbeaten Day 1.

They were just getting started after an easy victory over Dusseldorf LFDY (GER) in the quarters before a 17-6 semi-final thrashing of No.2 seed Amsterdam (NED), who only had three players.

Having given Antwerp all they could handle in the final, Fribourg proved they are the real deal and will have rivals taking them very seriously from now on. Jonathans on fire: Jonathan Kazadi and Jonathan Dubas had spectacular performances in Pristina.

The 6ft. 8in (2.04m) Dubas dominated inside to finish with 40 points and a leading 15 rebounds, while Kazadi was a walking bucket throughout as this new dynamic duo combined for 71 points.

Kazadi proved to be ice cold in the clutch with the buzzer beater on Day 1 against Jeddah, while Dubas had an astonishing 9-point, 11-rebound masterpiece to demolish Amsterdam in the semis.

Remember their names because these dudes are trouble. Hot favorite Antwerp were caught on the back foot as Fribourg packed the first punch to storm out to a 6-0 lead before you could blink.

In a major hole, the Belgians didn't panic and stormed back with Thibaut Vervoort going bang, bang to level the scores at 7 apiece. But Fribourg responded through Jonathan Dubas and Jonathan Kazadi (who had a triple-five of 5 points, 7 rebounds and 5 highlights in the final) . The 2 Jonathans traded buckets to power the underdog to a handy 13-8 advantage.

Once again Vervoort caught fire from deep as he dropped consecutive 2s to give Antwerp their first lead of the game at 15-14 with just over a minute left.

The defense went up a level in the dramatic final stages with athletic beast Caspar Augustijnen leaping from the sky for a memorable block, but the teams couldn't be separated after 10 minutes.

In OT it was Nick Celis who played hero ball with the two points required for Antwerp, including the game-winning layup after a brilliant pick-and-roll with Vervoort as the Belgians celebrated another W.

With Antwerp having already qualified, Fribourg and third-placed Amsterdam earned their ticket for the Debrecen Masters on August 27-28, 2022.

Key Stats:
- Third seed Jeddah (KSA) continued to struggle after failing to win a game.
-Fittingly the final proved to be the longest game of the tournament with the classic decider between Antwerp and Fribourg lasting 11'48'' of playing time.
- Matthias Linortner starred for Vienna and had the standout performance in Pristina with 14 points and 5 rebounds to overpower Omaha 3BALL (USA) in the quarters.
- The Pristina Challenger had (by far) the most triple-fives of the entire pro season (World Tour anc Challengers included) with a total of 6 (second best was the Poitiers Challenger with 3). The speedy Niklas Geske (Dusseldorf LFDY, GER) contributed 2 of them alone.