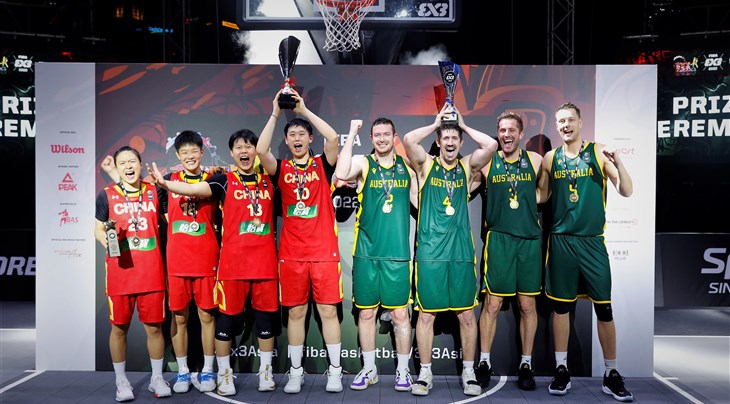 Australia completed a three-peat after defeating New Zealand 21-17 in a thriller of a final. Sharpshooter Andrew Steel had ice in his veins to finish with 8 points along with big man Daniel Johnson.

New sensation Jesse Wagstaff wrapped up the title with a layup and also won MVP after leading the scoring charts with 42 points from 5 games. He was joined on the Team of the Tournament by New Zealand's Nikau McCullough and 23-year-old Jiaren Zhao, who led China to a podium finish.

In the men's bronze medal game, a youthful China repeated their result from 2019 after surviving a furious challenge from the Philippines to prevail 20-18. Zeyi Liu was unstoppable in the paint to finish with 9 points, while Philippines star Almond Vosotros finished a spectacular tournament with 8 points.

China superstar Lili Wang was named MVP after once again showing her liking for the big stage having made the Team of the Tournament at the recent World Cup.

Joining Wang in the Team of the Tournament were rising star Anneli Maley (Australia) and bucket getter Kimberley Pierre-Louis, who led surprise packet Indonesia to a fairy-tale podium finish from qualifying after topping the overall scoring charts with 54 points from 5 games.

In the women's bronze medal game, Indonesia created history with their first Asia Cup medal after upsetting Japan 21-17 in a tense clash. Pierre-Louis continued her scoring binge with an insane 14 points to crush the hearts of Japan who were hoping to repeat their bronze finish from 2019.

Both Australia and China are now qualified for the FIBA 3x3 World Cup 2023.

It was the fifth edition of the Asia Cup, the first since 2019, and played in Singapore, where 3x3 was memorably unleashed to the world at the Youth Olympic Games in 2010.