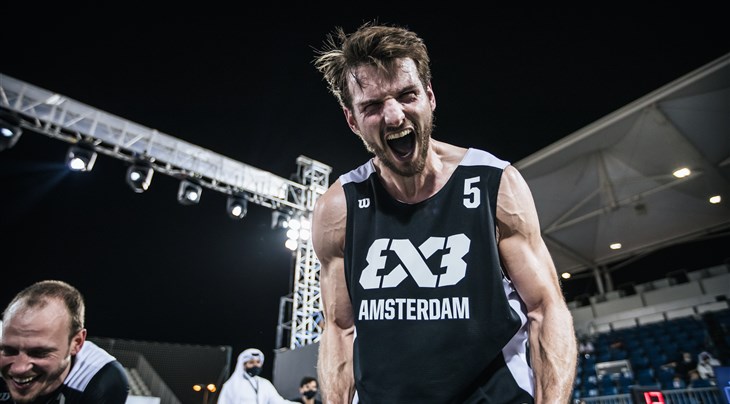 UTSUNOMIYA (Japan) - A new season brings fresh hope for the best 3x3 teams on the globe who are aiming to start the FIBA 3x3 World Tour 2022 with a bang at the Utsunomiya Opener on May 14-15.

Fourteen teams will be aiming to start with a W to kick-start the biggest ever World Tour, which features a record 13 events culminating in the showpiece Abu Dhabi Final.

While these teams will be dreaming of going all the way in historical Utsunomiya, how important is it to start with a victory? And does that ensure success through the season?

To find out the answers, we've had a look at the last five years of the World Tour to find out how the winners of the season's first event fared for the rest of the year.

One of the OGs, Ljubljana showed they hadn't lost their old magic with victory in Saskatoon, where they beat the hosts 21-14 in the final to cap an unbeaten run.

The Slovenians, unfortunately, couldn't repeat the success for the rest of the season but they still performed well with runners-up finishes in Prague and Debrecen before bowing out in the quarters at the Bloomage Beijing Final.

Considering they only played in six events that season, that's a pretty decent record which was all started with success in Saskatoon.

Novi Sad entered 2018 like four John Wicks after the heartbreak of losing the Bloomage Final 2017 to Zemun in the craziest finish ever on the World Tour.

They came out firing in Saskatoon and edged rival Liman 20-18 in a classic final - which would be one of the few times they were seriously challenged in a season for the ages.

The triumph in Saskatoon was an important lift for Novi Sad who regained their swagger after the jolt in Beijing. With their confidence restored, Novi Sad stormed through 2018 with the greatest run ever seen in 3x3 in a record win streak of 32.

Considering the unpredictable 21-point game, where anything can happen, Novi Sad's season-long unbeaten streak might never be broken and the catalyst for the historical feat can be traced back to their hot start in Saskatoon.

Considering all they've achieved since, most notably lifting Latvia to 3x3's first Olympic men's gold medal, it's hard to believe that just three years ago Riga had yet to win a Masters on the World Tour.

They had come close in 2018 with three runners-up finish, including narrowly falling short against unbeatable Novi Sad at the Bloomage Final. Riga's talent was undeniable but they just felt a little below powerhouses Novi Sad and Liman.

As the calendar ticked over into 2019, Riga vowed to make a statement and they did exactly that in Doha by beating Liman in a thrilling final 15-14, where Karlis Lasmanis claimed MVP as he made the leap into superstardom.

With the monkey off their back, Riga rose to the very top level of 3x3 with victories in Prague and Jeddah.

They can point to Doha as the real transformation from talented team to 3x3 powerhouse and it set the stage for these Latvians to create history in Tokyo.

After a delayed start to the season due to the Covid-19 pandemic, Liman made up for lost time with victory in Debrecen where Stefan Stojacic aka 'Mr Robot' made a stunning comeback after a lengthy injury with a MVP performance.

It fuelled a strong season for Liman, who won the Europe Masters before falling to an epic buzzer beater from Karlis Lasmanis in Doha.

Incredibly, Liman fell almost the same way to their foes in the World Tour Final decider with Nauris Miezis replicating his partner in crime's heroics with an all-time crazy buzzer beater.

Even though their season ended in devastation, Liman still enjoyed a highly successful season after a fast start in Debrecen.

Team Amsterdam had long been competitive on the World Tour but they became the Dutch Masters after the marquee signing of former Liman star Maksim Kovacevic.

They had big plans for the season and wanted to make a statement in Doha. Team Amsterdam did exactly that with a giant killing run, which included an epic quarter-final win over NY Harlem, tight victory over Liman in the semis before saving the best for last in a classic final against Novi Sad.

In maybe a changing of the guard, Team Amsterdam vanquished the team who had so often beaten them in the past with Kovacevic proving he is worth every cent with a fairy-tale buzzer beater to deliver the first World Tour title for the Dutch.

While they didn't add another for the remainder of the season, Team Amsterdam were one of the best teams with a string of deep runs, including a narrow semi-final loss to Gagarin at the Jeddah Final.

But it was the W in Doha that lit their fuse in another example of the importance of starting well in the season opener.

This trend should further motivate the field in Utsunomiya with the 14 teams desperate to open with that winning feeling.