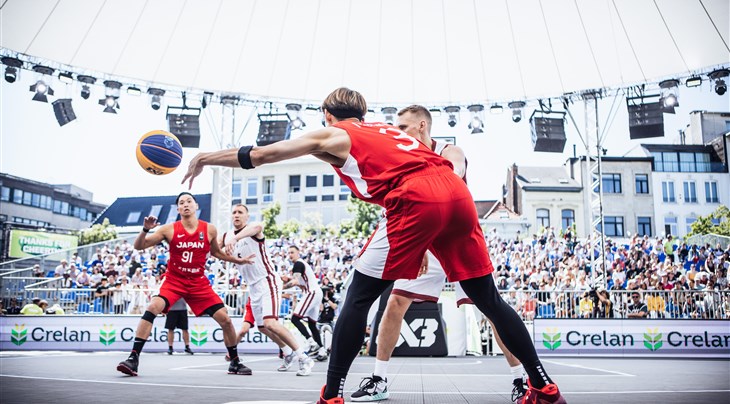 SINGAPORE - The time has arrived to end a three-year drought for the region's biggest 3x3 event as the FIBA 3x3 Asia Cup 2022 sparks to life on July 6-10.

The pride of Asia will be on the line and we've got all the information you need as 3x3 returns to where it all began for the 21-point game in Singapore, where the event will be played on the steps of the iconic Marina Bay Sands.

The action runs from July 6-10, and you can follow it live on TV and on social on the FIBA 3x3 YouTube, Facebook, Sina Weibo and Douyin pages.

There are a whopping 53 teams competing in Singapore. Qualification will be held on July 6-7 before the main draw - featuring 12 men's and 12 women's teams - on the following three days.

In the men's, No.1 seed Mongolia deserve top billing and have been on a mission to climb the ladder in 3x3. Few countries have invested more than Mongolia, who have embraced 3x3 to the extent where the game is now the most popular in the vast East Asian country.

And they have serious talent led by emerging superstar Anand Ariunbold, who is becoming a household name and a lights out performance in Singapore will continue his rise.

But Mongolia will likely have to deal with their rival Australia, who have beaten them in the final of the Asia Cup in 2018 and 2019. The Aussies are hoping to make up for lost time during the Covid-19 pandemic as they return to the international stage with a bang.

And if Melbourne's spectacular run at the Manila Masters is any indication then the two-time defending champs are primed for a deep run. They have three players from Melbourne's team including big fella Greg Hire, who is the heart and soul of Australia, and sniper Andrew Steel.

No.3 seed Japan can't be ignored even though they were winless during the FIBA 3x3 World Cup 2022. With Tomoya Ochiai aka 'Worm' in the line up and capable of producing magic tricks with the Wilson then Japan just have to be rated as a contender even though they face the long route of qualification.

In the women's, Tokyo 2020 Olympics bronze medalist China are the team to beat and just always rise to the occasion although have surprisingly never won gold at the Asia Cup.

They have a loaded team and the type of confidence on the big stage that no one else can match.

But it's far from a one-horse race with No.1 seed Mongolia having the chemistry and young talent to really make a statement if they can cope with the huge expectations that their national teams now face every time they step on the half court.

No.3 seed Japan are also rated highly and boast World Cup players Moe Nagata and Tamami Nakada, while defending champs Australia are probably the unknown with a raft of new faces but you can never underestimate the green and gold.

We've hyped up Ariunbold so much recently - deservedly so - that it's easy to overlook Delgernyam Davaasambuu, who is an absolute bull, and defensive specialist Dulguun Enkhbat, whose blocks are as pretty as his perfect hair.

We've mentioned a couple of Aussie guns but perhaps their secret weapon is newcomer Jesse Wagstaff, who made an impressive debut in Manila on the World Tour.

He's a bucket getter and best mates with Hire, so he's the ultimate wingman on the half court. And we just have to wax lyrical a little more on Ochiai as 'Worm' is a natural 3x3 entertainer and don't worry his nasty lefty game still fools players.

In the women's, Lili Wang would have to be the favorite for top scorer since she topped the scoring charts at the Tokyo Games. No.23, however, will share duties with partner in crime ZhiTang Zhang who at 6ft. 5in (1.96m) literally casts a giant shadow on the half court. With a lot of attention on Mongolian star Kulan Onolbaatar, Ariuntsetseg Bat-Erdene stepped up in Antwerp to prove she is the real deal. Jump on the bandwagon quickly becomes it's going to be full soon when the 21-year-old gets to work in Singapore

New Zealand star Jillian Harmon is also one to watch with the 6ft. 1in (1.85m) a walking bucket in the paint in Antwerp. We'll also keep an eye on 23-year-old Australian Anneli Maley, who will make her big international 3x3 debut after her first WNBA experience earlier this year.