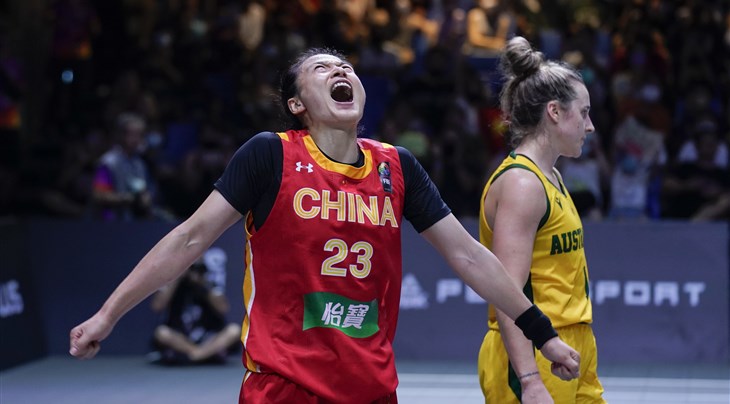 SINGAPORE - The first FIBA 3x3 Asia Cup in three years was worth the wait as the continental championships returned with a bang on July 6-10.

Here's all we learned from the five-day spectacle played at the footsteps of the iconic Marina Bay Sands in beautiful Singapore.

Having barely played since the Covid-19 pandemic, robbing them momentum, there was an unknown over Australia. But there was no need to worry as it was business as usual.

Australia's men claimed a three-peat after a tough win in the final over their rival New Zealand. It stretched their remarkable winning streak to 16 games in the Asia Cup with their last loss being in 2017 against Mongolia in the semi-finals.

Australia had three members of Melbourne's team who reached the semi-finals of the Manila Masters and that chemistry was vital. They added towering Daniel Johnson, who was a force inside and outside the paint as Australia continued their dominance in this competition.

Newcomer Jesse Wagstaff shone in his international debut and took home the MVP as Australia loom as the favorites at the upcoming Commonwealth Games, where 3x3 makes its debut.

The women couldn't defend their crown but this new-look team showcased plenty of talent led by young gun Anneli Maley, who was part of the Team of the Tournament.

They walked off with the silver medal to underline Australia's overall dominance in Asia.

China's trophy cabinet is getting rather full. They won gold at the World Cup 2019, bronze at the Tokyo Olympics and Crelan World Cup 2022, and have now claimed their first ever Asia Cup.

It maybe wasn't a walk in the park but China were never really seriously challenged in Singapore to cement their status as Asia's powerhouse women's team.

They impressively beat defending champions Australia twice, including in the final, and shut down their firepower with superb defense.

China's stars Lili Wang, who won MVP, and ZhiTang Zhang were absolutely dominant and a deadly one-two punch to strengthen their cases as the best players in Asia.

China undeniably continue to set the standard in Asia.

China men's had a youthful team in Singapore but they were mightily impressively to finish with bronze.

Twins Jiaren Zhao, who finished on the Team of the Tournament, and Jiayi Zhao were a two-pronged monster and the tall and athletic players are natural 3x3 players who can do it all.

With the 23-year-old's showing they are built for the big time, China's future looks very promising and they will have their sights on winning a first men's gold in the Asia Cup at the next edition. That was mostly due to the hot hand of Almond Vosotros, who poured in 33 points from 5 games, including numerous clutch buckets.

None bigger than his insane buzzer beater to take down No.1 seed Mongolia in the quarter-finals to call game and transform Marina Bay into downtown Manila.

Pierre-Louis was all buckets

Indonesia were the fairy tale story of the Asia Cup as they reached the podium for the first time ever with their women's finishing with bronze.

Most of their success was through Kimberley Pierre-Louis creating a heatwave in Singapore with an insane 54 points in 5 games to be a Wonder Woman on the half court.

No one could stop her as the 6ft (1.83m) athletic marvel was unstoppable in a breakout 3x3 performance to lead Indonesia on a giant-killing run from qualifying.

The 28-year-old certainly lived up to her nickname of 'Buckets'.

Singapore is a lit 3x3 venue

3x3 returned to Singapore, where the 21-point game was unleashed to the world at the Youth Olympic Games in 2010.

The Marina Bay Sands proved a suitably iconic venue as Singapore's famous skyline was a stunning backdrop to the action.

The steamy conditions and passionate fans added to an incredible fifth edition of the Asia Cup and a reminder that Singapore is an all-time 3x3 destination.