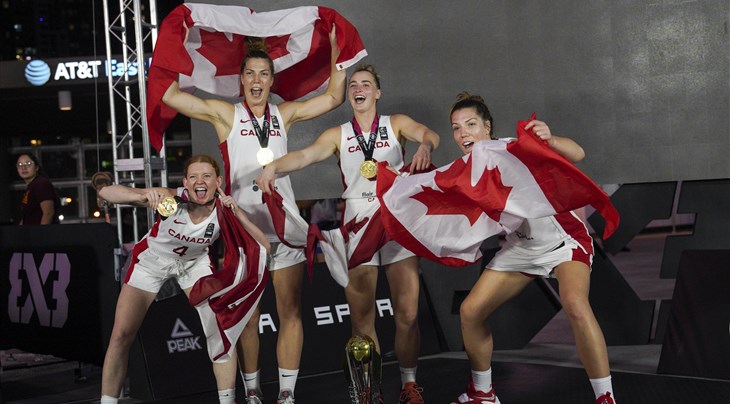 MIAMI (USA) - The second edition of the FIBA 3x3 AmeriCup lived up to the hype after a three-day spectacle in world famous Miami on November 4-6.

Surely there is no debate. After another MVP performance and leading Canada to glory, Michelle Plouffe is the best player in the world. Her top ranking confirms this, but so too the eye test as you would know after she dominated the half-court in Miami.

The unstoppable 6ft. 3in (1.90m) superstar finished second in scoring in the women's category with 32 points as she controlled the paint. In a tense semi-final against defending champs USA, who were stacked with WNBA players, Plouffe was the star amongst stars with a triple-five - a game-high 8 points, 9 highlights and 7 rebounds - to lead Canada to a thrilling victory.

She wasn't done yet with the 30-year-old scoring 9 points to lead Canada past Brazil in the final and cap a stunning 2022. With a gold medal around her neck, Plouffe added more silverware to her crowded trophy cabinet.

The pressure is always on mighty USA in any form of hoops. 3x3 is no exception with the USA the reigning champs although this team was slightly tweaked from 12 months ago.

USA had to use all their talent and strength to go back-to-back because they were pushed throughout, especially by Mexico in the quarters and Puerto Rico in a tough gold medal decider.

But they got the job done with Princeton stars Canyon Barry and Kareem Maddox showcasing their big stage chops with a combined 62 points. MVP Barry, whose father is NBA legend Rick Barry, was scoring from all angles while big fella 'Reem' was unstoppable when he rolled to the rim.

The pair are starting to challenge Michael Phelps in golds with their latest success adding to last year's triumph and glory at FIBA 3x3 World Cup 2019.

We've seen it in college and the NBA, but 'Jimmermania' swept into Miami after Jimmer Fredette made his 3x3 debut. And the 33-year-old didn't disappoint with 26 points to prove he's perfectly capable of dominating the half-court much to the delight of his legion of fans.

Bringing the heat to Miami, Fredette hit a number of clutch shots - none bigger than the two-piece to push USA past Puerto Rico in the final as he celebrated his first success in 3x3.

It might just be a taste of things to come with Fredette expressing his desire to play in the Paris Olympics in a sign of his commitment to 3x3.

The former BYU standout proved in Miami he was still a huge drawcard and everyone just can't wait for the next time he's on the half-court.

After winning silvers in both categories during fairy-tale runs last year, the pressure was on Brazil's teams. They showed why they are a heavyweight in the Americas with their women again winning silver while the men claimed bronze.

Vitoria Marcelino might need to be renamed Queen Vitoria because she ruled the 3x3 court to the beat of 40 points and the top rank in the scoring charts across both categories.

Leonardo Branquinho was similarly unstoppable for the men's as Brazil upset Canada in the quarters before claiming bronze against the giant-killing Trinidad and Tobago.

After another memorable campaign, Brazil are quite clearly a powerhouse in the Americas.

USA weren't quite able to repeat across the board with their women's team falling short although they still did claim bronze. It was a bit of a reality check for a team boasting three WNBA players, but confirmed that the depth of talent in women's 3x3 is getting deeper.

Camille Zimmerman, who plays for Japanese commercial team EXEWING on the FIBA 3x3 Women's Series, stole the show for USA with a team-leading 30 points as she showed the value of her 3x3 experience. An OG 3x3 nation, Puerto Rico were in the wilderness until they roared back to life during an amazing comeback season in 2021.

They've found this year harder to match those heights but Puerto Rico ended 2022 on a high with their hugely popular men's team winning silver.

The No.2 seed challenged star-studded USA in the final only to narrowly fall short but they should be happy with silver after missing out on the podium 12 months ago in a heartbreaking fashion.

Former NBA player Guillermo Diaz was lights out and combined to form a deadly duo with Jorge Matos as Puerto Rico's rise back to a 3x3 force was complete.