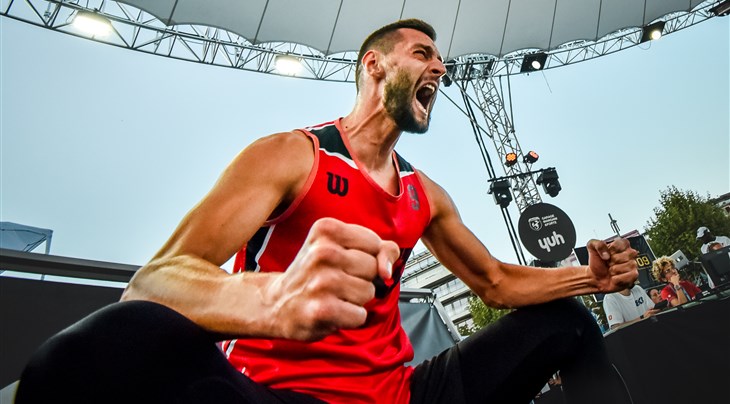 Much like the premiere of House of the Dragon, Ub have lived up to the hype as they continue collecting trophies after winning in Lausanne. Ub's fourth straight World Tour event title to start 2022 set a record even though their bid to chase Novi Sad's 32-game winning streak fell flat after a shock Day 1 loss to host Lausanne Sport (SUI).

But Ub gained revenge by silencing the crowd and beating Lausanne in the final to take 3x3 to new heights - particularly world No.1 Strahinja Stojacic who claimed his third MVP of the season to cement his status as the best in the business.

Despite all the success, defending Debrecen Masters champs Ub won't be carried away and they can't let their guard down because they face dangerous opponents Warsaw Lotto (POL) and Fribourg (SUI) in a tough Pool A.

The fully professional Poles entered 2022 with a lot of expectations but mostly struggled in Masters appearances in Manila and Prague. But they appear to be turning around their form after reaching the semis at the Quebec Challenger, where walking bucket Przemyslaw Zamojski was a flame thrower.

New kids on the block Fribourg won't be merely a third wheel having impressed in Challengers and they boast a range of athletic bigs, including Jonathan Dubas who loves to play bully ball.

And you haven't forgotten human highlight reel Natan Jurkovitz, right? Just watch these nasty plays from his golden days with Lausanne to get you hyped.

Pool B is headlined by desperate No.2 seed Liman Huishan NE with the 3x3 powerhouse left frustrated by rival Ub's complete domination of the World Tour. A full-strength Liman looked strong in Lausanne but again were no match for Ub to fall in the semis.

Their big guns will be in Debrecen and they'll need to be firing against Marijampole Mantinga (LTU) who made a statement with a runner-up finish at the Poitiers Challenger where Zygimantas Simonis breathed fire like Syrax in the first episode of the Game of Thrones spinoff.

After meeting in the semis in Lausanne, No.3 seed Amsterdam HiPro (NED) and in-form Lausanne Sport will clash again in a Pool C blockbuster. The Dutch Masters are always contenders and star Dimeo van der Horst was in golden form in the Olympic capital with an insane 8.3 ppg.

You never quite know what to get from unpredictable Lausanne but they enter with swagger after their home heroics. Westher Molteni and Marco Lehmann were a lethal one-two punch and if they continue their hot streak then the Swiss might finally get the Masters W they've long been waiting for.

Local hope Debrecen (HUN) will be out to make it much more than a two-horse race.

No.4 seed Antwerp (BEL) are hungry for their first ever title on the World Tour and extra motivated following a heartbreaking loss to Lausanne Sport in the quarters in Switzerland last weekend.

Thibaut Vervoort aka 'Must See TV' continues to be a ratings winner as he collected body bags in Switzerland and he'll need his springs to be working against the athletic beasts from Princeton (USA) with the teams meeting in a mouth-watering Pool D clash.

No.5 seed Princeton are hoping to break a three-year title drought on the World Tour but they've been rejuvenated this season with strong results starting with a runner-up finish at the Utsunomiya Opener.

Big fella Kareem Maddox has been dominating the rim for years to be the USA's most decorated 3x3 player, but Princeton have received a boost this season with the addition of Isaiah Wilkerson who is built like a bull and can dominate the paint against much taller opponents.