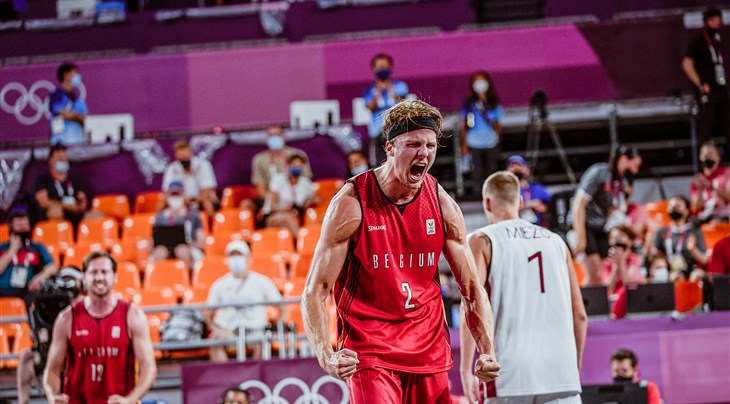 ANTWERP (Belgium) - After a three-year absence, the biggest event on the calendar is back with a bang as 40 teams dream of winning the ultimate at the Crelan FIBA 3x3 World Cup 2022 on June 21-26.

Here are 10 reasons to watch.

The last time the World Cup was held, Corona was only known for being a tasty beer. Things have really changed since 2019 and it's been a tough three years for everybody.

But life is returning back to normal and that means the return of your favorite event. The World Cup is the biggest national team event in 3x3 and a chance for teams to sit on the throne and be crowned world champions.

Serbia may have dominated the men's but seven nations overall won titles in the first six editions to underline that anyone can realistically dream of glory.

After a three-year wait, the World Cup is back and bigger than ever before.

Belgium is a rising 3x3 nation and they get to showcase to the world their growing love for 3x3 as host of the seventh edition of the World Cup.

It takes place, fittingly, in the beautiful city of Antwerp whose emerging pro circuit men's team has helped make the historic port a household name worldwide.

The event takes place on the Groenplaats, which is a large square situated to the south of the Antwerp Cathedral, with a total capacity of 1,800 fans who will go bonkers if Belgium can go all the way.

By the time the event is over, Antwerp will be among the shortlist of best 3x3 venues all-time. The big guns will be in Antwerp in a heavyweight battle to see who are the last teams standing.

Serbia are gunning for an incredible fifth - fiifth! - men's title but the talent and depth has never been deeper with a number of countries wanting to become the new powerhouse of 3x3 led by defending champs Team USA and the Olympic champs from Latvia.

The women's is similarly loaded with Olympic gold medalists USA back after missing out on the FIBA 3x3 World Cup 2019 while defending champs China love the big stage having also claimed the bronze at the Tokyo Olympics.

But sharing is caring in the women's with USA - in 2012 and 2014 - the only multiple winners. Which just proves that anyone in the draw can dream big.

More stars than ever before

This World Cup will have more stars than on Top Gun: Maverick's Rotten Tomatoes page.

You know many of them already through the World Tour or Women's Series like superhero Nauris Miezis aka 'Robin', the No.1 player in the world Strahinja Stojacic aka 'Dr Strange', the No.1 women's player Sonja Greinacher and former No.1 Laetitia Guapo.

But the best part will be watching newcomers make the leap and become stars before our very eyes. Interestingly, the event will feature two former U18 World Cup MVPs in Hailey Van Lith (women's MVP in 2019 with USA) and Tai Wynyard (men's MVP in 2015 with New Zealand).

At every hoops event, at any level, the red, white and blue always carry with them enormous expectations and this will be no different.

The defending men's champs have a different lineup than three years ago but just as much talent led by dynamic Princeton duo Dominique Jones - who you really know as 'Disco Domo' - and Kidani Brutus, while newcomers Khalil Iverson and James Parrott are set to explode onto the scene.

The women's team is more hyped than Stranger Things season 4 and filled with the super-talented above-mentioned 20-year-old Hailey Van Lith.

But they also have World Cup winning pedigree through 3x3 OG Cierra Burdick, who back in 2014 melted down social media by dunking in the warm-ups and won gold. If USA win gold in Belgium, Burdick will become the first-ever woman to win the 3x3 World Cup twice.

You just can't take your eyes off Team USA, who are always box office.

Can 'Must See TV' lead the hosts to glory?

If there's one player who has the most pressure in Antwerp it might just be hometown hero Thibaut Vervoort aka 'Must See TV'.

The stakes are huge for the insanely talented 24-year-old who if he can lead Belgium to glory will be instantly a national treasure. But his form has been a bit patchy this season although you just know he'll be primed for the biggest moment of his career.

All Belgians will be flicking the channel to the only show to watch starting on June 21.

One of the reasons 3x3 has become a global sensation is that this game just lends itself to unpredictability and upsets.

The short time frame and low score target means - in the immortal words of KG - that 'anything is possiblleeeee' and that rings true in the World Cup.

Teams can go on a streak real quick, with notable examples being Qatar (men's 2014) and Czechia (women's 2016) shocking the world.

Don't be surprised if a team goes all the way from nowhere.

To prove FIBA's commitment to gender equality, the men's and women's events are played simultaneously.

There will be 52 men and 52 women's games in just 6 days - we really hope Kyle Montgomery aka 'the Voice' is resting his tonsils.

Quick, finish whatever you need to do because you're going to clear your calendar. Time to put on the 'do not disturb' status.

Well you've come to the right place because the World Cup has all of the above and more.

Don't believe me? Check out the best plays from the past.

This is everyone's favorite contest and it goes up a level every World Cup.

We'll keep you guessing who'll be in the line-up but rest assured they'll be pulling out dunks you have never seen before or didn't think were humanly possible.

So circle 10pm local time, Saturday June 25, because you don't want to miss this.