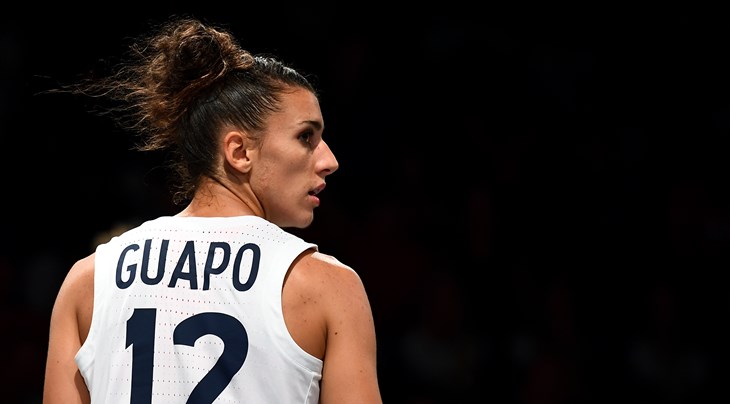 Not only will we see the return of the Women's Series, starting in Mies on May 15-16 at the official FIBA headquarters, but the Olympics are finally slated to take place in Tokyo this summer.

It's a welcomed return following more than a year-long layoff from 3x3.

"Last year was hard because of the lockdown in France. I tried to stay in shape because we didn’t know if we would have the Olympics or not. Once they postponed it, I started getting ready for my basketball season."

Guapo went on to play for Bourges Basket, a French professional basketball team in the EuroLeague Women, which was eliminated from the competition in the pool stage. Things went much better in the French national league, where her team currently ranks first with a sick ridiculous 20-2 record. As soon as her basketball season is over, she will begin preparing for the return of 3x3 basketball, including the return of the Women's Series.

"I am so excited about the return of the Women’s Series season… We will be there, and we will give everything we have."

In 2019, giving it their all led to a staggering six first-place finishes for Guapo and France. Migna Touré, Ana Maria Filip, Marie-Eve Paget, Alice Nayo, and Caroline Hériaud combined to win 84% of their games, best at the Women’s Series, and finished with the most points, highlights, and two-pointers made. For Guapo, their domination comes down to comradery and elite talent.

"We know each other perfectly. I’ve played basketball with them at different clubs. In France, I think we have the best 3x3 players so it’s easy (to play) like this. We had a great 2019 3x3 season with all of these wins. We were in great shape and great spirits, so it was really great."

While the Women’s Series ramps up, Guapo also has the Olympic qualifiers squarely on her mind. Despite France’s win at the Europe Cup 2019 and a third-place finish at the World Cup 2019, they will need to get through tough competition to earn their spot.

"When we learned that we hadn’t directly qualified for the Olympics it was a little bit hard, so we are going to prepare ourselves and our team to fight to get into the Olympic tournament. We know that even though we won the Europe Cup 2019 and finished third at the World Cup 2019, it will be really hard. Every team wants the same thing we do, but we will be there, and we will fight to finish in first place. We will be ready."

This will come down to Guapo and her French teammates, who account for four of the top six ranked players in the world.

"I really want to see France in the Olympics. With 3x3 in the Olympics for the first time, it will be a big motivation. I want to honor the French flag and my country. I will fight with my teammates to do so." While Guapo talks humbly about her game, the number one player in the FIBA 3x3 player rankings has plenty to shout about. Besides finishing 5th in the Women’s Series in two-pointers made, she also sends back defenders’ shots like a bad meal. She swatted 21 shots, 5th best on tour, and finished 5th in P-VAL (179). This success is just is all part of her love for the game.

"At the beginning, when I started playing 3x3 I did it to be with my teammates, to enjoy playing basketball, and enjoying playing the format. This was the cherry on the cake. I was really proud, but without my teammates, and all the winning we did in the summer of 2019, it would be impossible. I am so thankful for my teammates, the staff, my coaches, and all the work I did before to get to this place. I am really proud to be the number one player in the world."