Who can still make it to the FIBA 3x3 World Tour Jeddah Final? 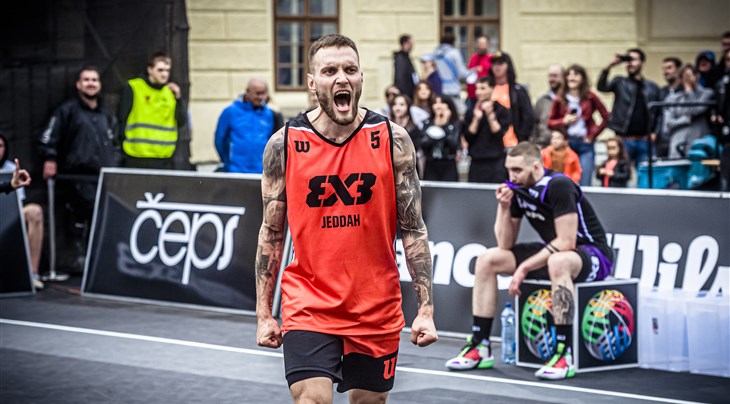 MEXICO CITY (Mexico) - There is so much at stake at the last Masters of the season, the FIBA 3x3 World Tour Mexico City Masters this coming weekend with tickets still up for grabs for the World Tour Final in Jeddah on December 17-18.

We did the maths in our office - a Beautiful Mind style - and came up with this cheat sheet. This should add even more drama to the Mexico City Masters.

*will be official after they compete at the Mexico City Masters

For the first 5, it's simple: they already have more than 100 points than any team not currently ranked in the top 12 in the standings. Since 100 points is the maximum amount of points a team can earn at a Masters, this means that mathematically they are guaranteed to finish in the top 12 and therefore compete in the final.

For Princeton, this required a little bit more thinking. The 2019 World Tour runner-ups currently rank 6th with 143 points and will not play in Mexico. A total of 6 teams currently ranked lower in the standings have a chance to (simultaneously) leapfrog them in the standings after Mexico... but this means that in the worst case scenario for the US team, Princeton would rank 12th and get the last ticket to Saudi Arabia.

Still following? One more thing: the teams currently ranked 8th to 10th Sakiai Gulbele (LTU), Jeddah (KSA) and San Juan PCI Group (PUR) have qualified to the Mexico City Masters and by virtue of just competing in the tournament (even if they finish last), they will get enough points to overtake Graz in the World Tour standings and be ranked 7th to 9th. Only 3 teams ranked lower in the standings can go past these 3 teams, meaning - once again - that in the worst case scenario for these squads, they would rank 12th and get the last ticket to Saudi Arabia.

Whose fans must like their chances of making it?

The team currently ranked 7th in the standings Graz (AUT) will not play in Mexico City. This said, with a total of 127 points, they have a substantial cushion over the teams that are currently not in the Top 12.

It would take a combination of Ulaanbaatar MMC Energy (MGL) winning in Mexico and both Lausanne Sport (SUI) and Gagarin (RUS) reaching the semi-finals for Graz to miss out on Jeddah.

What about the other two teams currently in the Top 12?

For the first time since 2013, Piran (SLO) will not participate in the World Tour Final. As a matter of fact, it will mark the first time ever in World Tour history that no Slovenian team will play in the final. Piran currently rank 12th but Lausanne Sport (SUI) will automatically take them over with the points earned in Mexico City regardless of their final standings.

The 4-time World Tour winners Novi Sad (SRB) are not out yet but are at the mercy of two lower-ranked teams shining in Mexico. If Lausanne Sport and Gagarin (RUS) both make it to the Top 6 this weekend, Novi Sad will miss their first World Tour final since the first edition in 2012. If one of these two teams reach the Top 6, Ulaanbaatar MMC Energy (MGL) make the final or Runa (RUS) or Omaha 3 Ball (USA) win the title, ditto.

What has to happen for teams currently outside of the Top 12 to make the final?

You could argue that any team playing in Mexico can still make it to Jeddah by winning the Masters. This would require both Lausanne Sport and Gagarin to go out in the pool phase and Ulaanbaatar to bid farewell before the semi-finals. But there's hope for a crazy Cinderella story in Mexico City.

But as said, Lausanne Sport have the upper hand here. If they make the Top 4, they will be guaranteed to go to Jeddah. Top 6 would be enough if they do better than Gagarin and Ulaanbaatar MMC Energy in Mexico. As a matter of fact, if they rank better than Gagarin and Ulaanbaatar in Mexico, their only chance of not making it to the final is for a team playing their first Masters of the season winning the title in Mexico or Runa (RUS), Omaha 3Ball (USA) or Utrecht (NED) to reach the final.

Similarly, Gagarin need to finish in the Top 4 in Mexico to be absolutely guaranteed to go to Jeddah, though they can still make it by being in the Top 6 if they finish higher than Lausanne Sport and Ulaanbaatar MMC Energy.

Just like last year, Ulaanbaatar MMC Energy could make it to the World Tour Final but this would take them to have a deep run on Day 2 and do substantially better than Lausanne Sport and Gagarin. But after beating the previous Masters' winners (Jeddah) in Abu Dhabi, we don't rule out anything for the Mongolian team.

Where can I watch all this drama?

Make sure you are following us on Twitter and Instagram for live updates in addition to Facebook and YouTube where we will be broadcasting live on both channels. Something that has been new and very exciting this year: we are also live on Twitch!