Who are the favorites to qualify for the Olympics with the women at the FIBA 3x3 OQT? 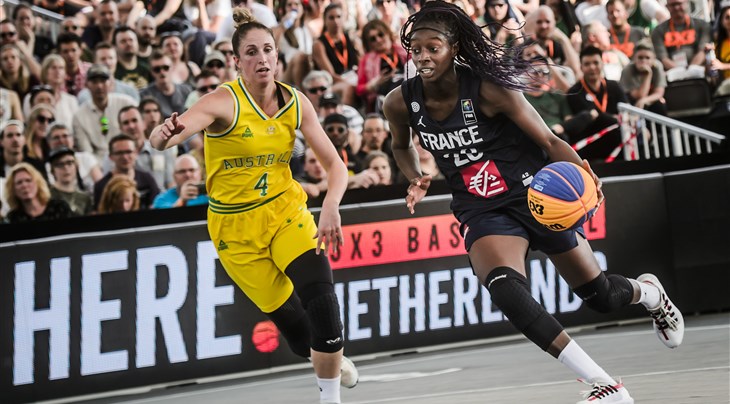 GRAZ (Austria) - We’re just days away from the start of the FIBA 3x3 Olympic Qualifying Tournament and we are as excited as a little kid on Christmas morning.

The best women’s players in the world will fly to Graz, Austria to earn their spot at the Tokyo Olympic Games, a chance to show the world what 3x3 is all about.

Luckily for us, the qualifying tournament will be one for the ages. We have 20 teams vying for 3 spots. Here is a closer look at the upcoming OQT and the teams we have our eyes on…

France - No. 1 in Rankings
There aren’t enough superlatives to describe this French side. They were completely dominant on the Women’s Series in 2019. They also account for four of the top 6 players in the world, including the top-ranked player, Laetitia Guapo. The team also has 6 medals under their belts, winners of FIBA 3x3 Europe Cup 2018 and 2019.

The Netherlands - No. 4 in Rankings
Jill and Loyce Bettonvil lead The Netherlands into Pool C as one of the favorites to advance to the bracket stage. The FIBA 3x3 Europe Cup 2018 silver medalists have the chemistry and talent to make it their first basketball Olympic event in the nation’s history.

Japan - No. 5 in Rankings
The Olympic host nation brings to Graz the core of the team, who brought the first-ever world title in basketball to Japan. That was 2 years ago at the FIBA 3x3 U23 World Cup. It might make you feel dizzy but keep an eye on that tournament MVP Mai Yamamoto, whose first step is quicker than gossip.

Italy - No. 7 in Rankings
When Italy won the 3x3 World Cup in 2018, it was a coming-out party for Rae Lin D’Alie, Italy’s top player and the MVP at the event. Now, three years later, Italy has become one of the most feared teams in 3x3 and will go as far as their dragster can take them.

Spain - No. 10 in Rankings
Spain has fired their warning shot to the rest of the field. The Women’s Series 2021 kicked off with an undefeated run by Sandra Ygueravide and her Spanish teammates, winning in Mies and shooting the lights out. The same squad heads to Graz to keep the momentum going and continue Spanish excellence on the court.

Hungary - No. 12 in Rankings
They will be in Pool C as the second highest-ranked team behind The Netherlands. They will bring their top four ranked players into the event, led by Cyesha Goree, the 26th ranked player in the world. They had a tough start to the Women's Series, but with the big games coming up, they'll regroup and make their push for Tokyo.

USA - No. 13 in Rankings
USA brings big-time talent into the qualifiers, including four WNBA players. The US have been known as the gold standard for basketball at the Olympics and Kelsey Plum is a beast. But will her basketball skills translate to 3x3 without any major international tournament under her belt?

Germany - No. 19 in Rankings
Satou Sabally teams up with her sister Nyara and the rest of the German team to try and overcome the very talented Pool A, which includes France and the USA. She is another big star that will headline the qualifying event that everyone will be talking about.

Australia - No. 21 in Rankings

Back in 2019, that Australian team won 100% of the Women's Series where they competed (2), the Asia Cup and reached the semi-finals of the World Cup. They may not be top 20 in the Federation Ranking but definitely crack the Top 5 in the power ranking. Bec Cole? Maddie Garrick? Alice Kunek? Pick your poison, This team can get buckets from the rim to the logo.

3x3 is always unpredictable, so we threw in a few of our favorite underdog teams to keep on your radar.

Belarus sends their four best players to Graz, all ranked in the top 100. Pool C presents a real challenge though, with the team needing to overcome The Netherlands and Hungary.

Ukraine have won a medal with the women in 3x3 every year from 2015 and 2018 and bring back some of their most iconic players in Ganna Rulyova and Olga Maznichenko. These two know 3x3 like the back of their shooting hand.

Qualifying host-nation Austria is an underdog in every sense of the word, but playing in your home country always brings a little extra juice. It would certainly be a sight to see the 29th ranked team in the world make the country’s first basketball event.

The action starts on May 26, and you can live stream the event on the official FIBA Twitch channel, the FIBA 3x3 YouTube and Facebook pages.