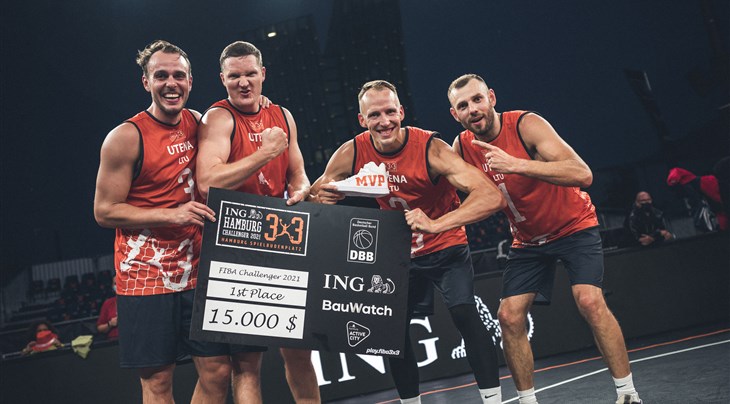 It was a well-earned victory, defeating favorites Liman (SRB), 18-16 in the final. Here is how the action-packed weekend went down.

Utena 🇱🇹 pull off the upset over Liman 🇷🇸 to win #3x3ChHamburg, securing the $15,000 prize and spot on the World Tour! 🎉💰#3x3Challenger pic.twitter.com/cASOy6FPqc

The qualifying draw had us getting the popcorn ready early on with Skopje Kino Vlae (MKD) and Bonn (GER) both earning their way into the Pool stage.

Day 1 was a slugfest. Every heavyweight contender was throwing haymakers, but they were also taking a few on the chin.

Nantes (FRA) and Antwerp (BEL) were the only two teams to go undefeated on the day while Liman (SRB), Sakiai Gulbele (LTU), and Lausanne Sport (SUI), the top three seeds, all took an L.

Utena Uniclub (LTU), the eventual champions, defeated Lausanne in the second to last game of the Pool stage to propel themselves into the bracket. To give you an idea of just how close the competition was, there were only two games in the entire pool stage that were decided by more than 4 points. These teams were extremely even and we all had to catch a breather after that many nail-bitters.

In the bracket, the first two games saw both unbeaten teams go down.

Utena Uniclub led wire-to-wire against Nantes, including an Ignas Labutis Buzzer-Beater to give the Lithuanian side the 21-20 win. Graz, who we warned everyone would be a tough out, beat Antwerp 17-12, ending their dreams of a third 3x3 Challenger title in 2021.

Pirot and Liman both made their country proud, punching their tickets to the semifinals, where they would face off in an all-Serbian showdown. Mihailo Vasic might have just won the bronze, but he was playing with a game of gold vs. Pirot. He was a one-man wrecking crew, putting up 11 points and 7 rebounds in a winning effort.

In the other semifinal, Utena kept relying on Gintautas Matulis, who scored a staggering 12 points on 11/14 shooting from the field. No matter what Graz threw at them, Utena always had an answer, including the final basket from who else but Matulis, getting the 21-18 win. The final was a showdown of two of the World Tour 2020's best teams, Liman vs. Utena.

It was raining everything in Hamburg on Saturday, except shots from behind the arc. Utena brought the ball in the middle and hit 14-19 from 1-point range, never trailed, and lifted the 3x3 Challenger big check for the first time.

To no surprise, offensive juggernaut Gintautas Matulis was named MVP for his heroic efforts all weekend long.

The 3x3 Challengers continue with the Ghetto Basket Riga Challenger on August 24-25 in the Latvian capital. Sakiai Gulbele (LTU), Ub (SRB), Amsterdam Talent&Pro (NED), and Princeton (USA) are already all registered for the event later this month.