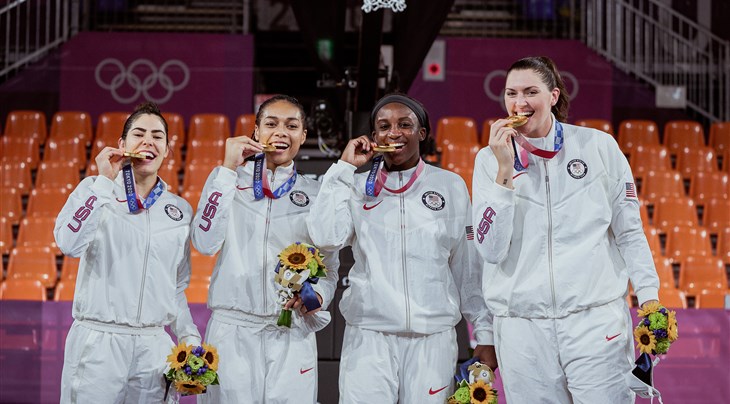 TOKYO (Japan) - USA's jubilant stars have rated their gold medal triumph at the Tokyo Olympics as the best moment of their decorated careers.

Hot favorite USA lived up to the hype by edging out the Russian Olympic Committee (ROC) in a thrilling gold medal game (18-15).

The star-studded USA is filled with WNBA talent who have accomplished many accolades in their careers but winning 3x3's first women's gold medal powered to the top of their lists.

"Definitely ranks at the top for what we were able to accomplish for our country", said Allisha Gray, whose all-round game was a key feature in USA's arsenal.

The triumph was extra special for the team's leader Kelsey Plum, whose Olympic dream looked over a year ago when she tore her Achilles playing 3x3. But she came back stronger than ever and was the heart and soul of USA.

The Las Vegas Aces star showed off her talents by topping the scoring charts with 55 points that was filled with spectacular drives and clutch twos.

Having come back from adversity, the victory was even sweeter for Plum.

Hang it in the Louvre 🥇#Tokyo2020 #3x3 pic.twitter.com/xZokLgIahm

"I didn't know I was going to be here after tearing my Achilles," she said. "I feel really grateful.

"USA Basketball could have quit on me but they didn't. This would rank the highest on my list (of my career)."

Being the first women's 3x3 Olympic gold medallist is something this USA team will forever share together. Being a trailblazer on the biggest stage in sports and creating history was "really special" for Plum.

"This group has worked really hard and taken time to learn this game...this game is not easy," the 26-year-old said.

"This was not an easy tournament, all the teams we really respected. What a great sport to debut on the Olympics and we're proud to bring home gold."

The towering Stefanie Dolson, who led USA with 7 points and 9 rebounds in the gold medal game, said the team concentrated on crashing the boards and defense to get through a tough ROC team.

"Going into it we knew they would be physical and we needed stops," she said. "I wasn't doing a great job offensively so it was about defense and rebounds.

"To win a gold medal is the goal I've had since I was a kid. I'm proud of this team and that we fought through it."