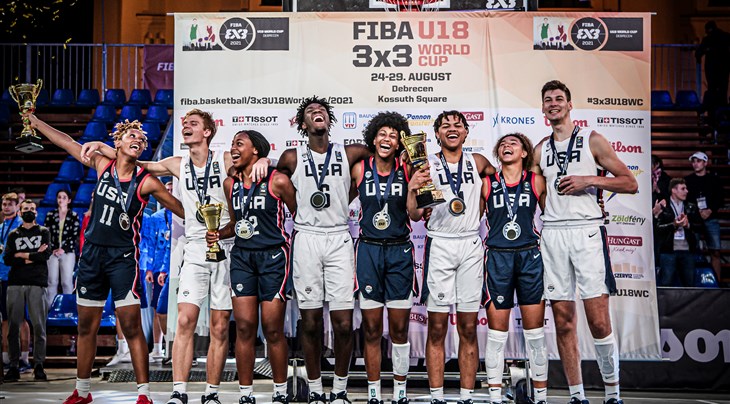 DEBRECEN (Hungary) - USA made history again by successfully defending their FIBA 3x3 U18 World Cup titles in both the men and the women's categories in Debrecen, Hungary on August 24-29, 2021.

Two years after completing the historic double for the first time in Mongolia, the United States repeated after going undefeated with the men and 6-1 with the women (their only loss coming against Russia in the pool stage).

At just 16 years old, Mikaylah Williams was sensational for the women's team, comfortably leading the scoring charts (with 56 points overall, the second had just 36) and winning MVP. She had a game-high 10 points and buried a shot from the 3x3 logo for the win against Spain in the final (21-14).

Spain's Elena Buenavida and Zita Szabo - who led Hungary to bronze in front of the huge home crowd - joined Williams on the team of the tournament.

In the men's category, the United States won every single game before the 10-minute limit. Estonia were the only team that tested the high-flying American team, in their opener (21-17) and in the final (21-14).

After a slow U.S. start, Kyle Filipowski controlled the paint like Picasso in the final (game-high 9 points in the final). His teammate Keyonte George added 7 to move up to second overall in scoring on the entire tournament. George scored in all positions in Hungary and received the MVP trophy from Russian basketball legend and FIBA 3x3 Commission Chairman Andrei Kirilenko.

Egypt finished fourth in the men's category, the best-ever performance by an African team in the competition.