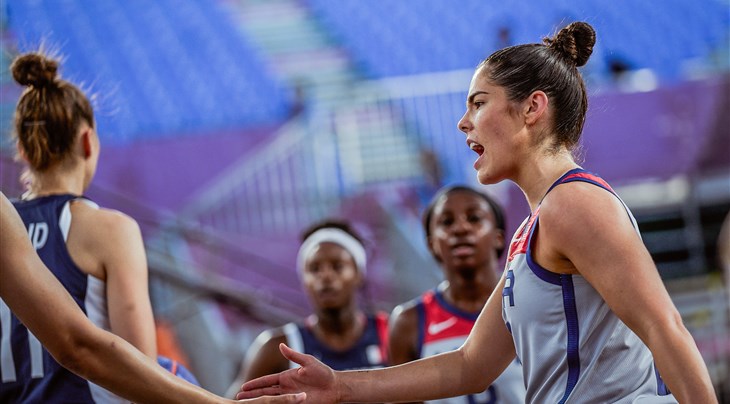 TOKYO (Japan) - USA made a day one statement with a comfortable 17-10 win over France in a heavyweight clash in the women's Olympics competition.

With French president Emmanuel Macron and First Lady of the USA Dr. Jill Biden watching from the stands, there was much expectation over these teams who many think will meet in the final but USA proved too strong in a warning to rivals.

Talented USA's squad is filled with WNBA stars and they represent the red, white and blue's hopes in 3x3 with their men's team failing to qualify for Tokyo.

France dominated the 2019 Women's Series but have now lost two straight to USA having fallen to them 21-17 at the Olympic Qualifying Tournament.

‼️ @usab3x3 🇺🇸get off to a strong start as they beat @3x3Ffbb 🇫🇷 in their opening Women's Pool game. #Tokyo2020 #3x3 pic.twitter.com/ZYBbfWp3jV

Kelsey Plum is the heartbeat of the USA team having overcome a major Achilles to get back to her best and she started fast with early buckets in the fast and furious contest.

She was matched by Marie-Eve Paget who often gets overshadowed her star teammates but she is a tour de force herself.

The USA decided to go down low to the towering Stefanie Dolson, who used her 1.95m (6ft 4in) frame to devastating effect and dominated in the paint to give her team the edge with a handy buffer.

Buckets suddenly became difficult for USA as France lifted their defensive intensity. That was until Plum slithered into the basket and finished with a gorgeous layup to give USA a 15-10 lead and they were never threatened after that.

In a game filled with stars, it was Dolson who stole show with a game-high 7 points on 7-of-8 shooting from the field. French power duo Migna Toure and Laetitia Guapo combined for just 5 points.