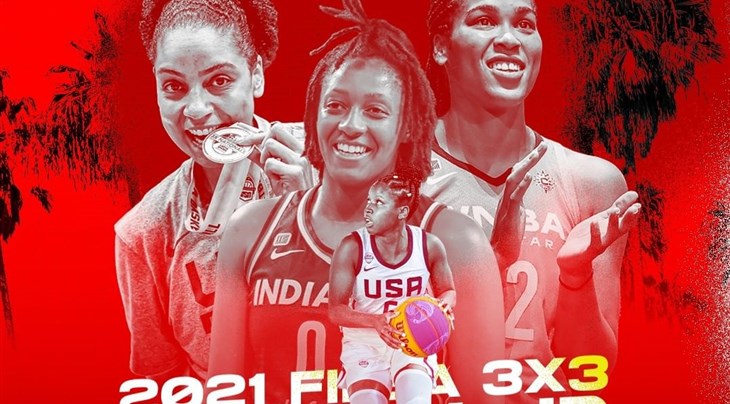 Cierra Burdick, Brionna Jones, Kelsey Mitchell and Alexis Peterson will lead the squad into action, coming in with plenty of basketball and 3x3 experience.

Burdick and Peterson were members of the Force 10 3x3 team that won the title at the 2021 Red Bull USA Basketball 3X Nationals in June, where Burdick was tournament MVP.

They also played at the FIBA 3x3 Women’s Series Klaipeda Stop in July in Lithuania, going 5-0 and winning USA's first-ever title in the competition.

Peterson and Burdick also have plenty of basketball experience under their belt, as a matter of fact Burdick played a key role on the Seattle Storm last season. Their two teammates are household names in the league.

The speedy Kelsey Mitchell has already represented the US in basketball and was a finalist for the FIBA Basketball Women's World Cup 2018. She has been a force for the Indiana Fever in the WNBA since going second in the draft in 2018.

The towering (6ft. 3in., 1.90m) Brionna Jones is a star in the Euroleague Women for ZVVZ USK Praha and was a WNBA All Star and Most Improved Player this year. The 25-year-old owns a gold medal with USA Basketball from the 2015 World University Games.

The FIBA 3x3 AmeriCup 2021 will feature a qualifying round that includes four teams, and the top finishing team will advance from that field.

The USA will play in Pool B, opening against Venezuela followed by Argentina.

The medal round will take place on November 14, with the top two teams from each of the four pools competing in quarterfinal action.

The AmeriCup winners will earn a qualifying berth into the FIBA 3x3 World Cup 2022.