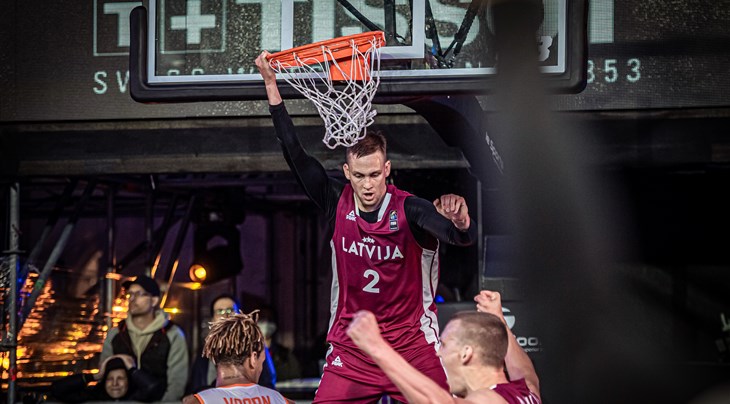 GRAZ (Austria) - The action was hot on Day 2 and the only thing that cooled us down was a few hours of rain. After two days of the FIBA 3x3 Olympic Qualifying Tournament, we've had every team play at least one game, and some early favorites emerge.

The United States, Belgium, Canada and Latvia went undefeated on the men's side while the American women, Hungary, Estonia and Germany were perfect on the women's side.

Let’s take a closer look at the best of Day 2 of Olympic qualifying.

USA (Women)
We all know about the golden history of USA women's basketball, and it's looking like the 3x3 squad is ready to continue the tradition of excellence. Allisha Gray of the WNBA's Dallas Wings finished with 15 points over two games (including one without her glasses), the second-leading scorer on the day. In their marquee matchup vs. France, the Americans prevailed 21-17 in what could be a preview of an Olympic showdown.

Latvia (Men)
While some teams have been preparing for this event for weeks and months, Latvia has been on this grind for years. The men who go by "Riga" on the World Tour, took care of business in their first day of action, knocking off Austria and the Netherlands, two teams that are plenty to handle. Karlis Lasmanis and the boys were up to the task and find themselves in pole position in Pool D.

This is how you win a game in 3x3😤 😤#3x3OQT pic.twitter.com/jkBkM5sKaP

Satou Sabally (Women)
22 points, two wins, and the scariest left hand in the women's game. Satou Sabally came to ball at the OQT, bringing Germany one step closer to qualification. She sits second in overall scoring for the event, but it's her passing and playmaking that are the real story.

Karlis Lasmanis (Men)
The man is a walking bucket. We're used to seeing Lasmanis, aka 'Batman' fill up the score sheet and the Olympic Qualifying Tournament is no different. He finished the day with 19 points, good for second-best in the field thus far.

Migna Touré (Women)
The number two player in the world had her defender checking to see if her shoelaces were tied together. Just another day in the life of a baller.

Minsu Park (Men)
Sometimes, you just have to do it by yourself. Minsu Park was faking so hard the cameraman was getting dizzy.

The USA comes all the way back (Men)
Nobody is surprised that team USA was able to prevail over Lithuania. But, it was the way they did it that sent shock waves through the 3x3 world. With their backs against the wall, Joey King, a last-minute replacement for the injured Canyon Barry, hit the Tissot buzzer-beater to give the Americans the 21-20 win. Down 20-16 with 1:54 to play, they went to work on both ends of the ball, narrowly escaping their first game of the day.

We have bonus 3x3 action coming your way tomorrow! Due to the rain delay, we have three extra games to start the day ahead of regularly scheduled fixtures.