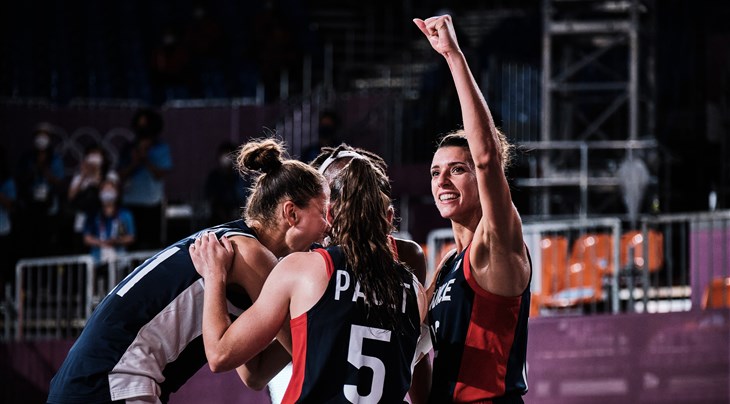 But first there are four huge semi-finals in the men's and women's brackets to get through.

No.1 seed Serbia are red-hot favorites having been unstoppable in the pool stage where they were 7-0, including an easy 21-10 win over ROC earlier on day four.

In an ominous warning, Serbia have steadily built chemistry and torched ROC through slick passing leading to easy buckets at the rim like it was a layup drill.

ROC should be better prepared this time and received a confidence boost after downing in-form Netherlands 21-19 in a thrilling quarter-final.

Young star Alexander Zuev was dynamic and hot from deep with a game high 9 points and he will need to do something similar if ROC can cause a major upset.

Serbia have almost no weakness with Dusan Bulut predictably playing at his best, while Dejan Majstoroic has rediscovered top form in Tokyo.

And when things are tough on the perimeter they have Mihailo Vasic and Aleksandar Ratkov who feast in the paint.

It appears mission impossible for ROC but they should feel encouraged knowing that anything is possible in 3x3.

These two teams had never played each other before their classic pool game where Belgium won through a buzzer beater from Thibaut Vervoort who has become the deadliest marksman in Tokyo.

Vervoort has delivered two more buzzer beaters, including an insane two-piece to down Poland on day four. He has become a star and symbolizes confident Belgium, who were the last team to book a ticket to Tokyo.

They are on a fairy tale run but face 3x3 power Latvia, who many expected to finish on the podium.

Latvia struggled early but a team get together after day three seemed to spark the team into gear as they played much better on day four highlighted by overcoming Japan in a shootout of a quarter-final.

It's the experienced 3x3 heavyweights versus the swaggering new kids on the block.

This was tipped by many as a gold medal match-up but the hot favorite and No.1 seed meet earlier than expected.

That is due to France's stuttering to 1-3 but they have peaked at the right time to win four straight to revive their dreams of a gold medal.

Their turnaround has been sparked by superstars Laetitia Guapo and Migna Toure shaking off slow starts to add much firepower for a France team who in the earlier games were reliant on the wizardy of Marie-Eve Paget for buckets.

France will have to click on all cylinders to stop USA, who will be keen to bounce back after a shock loss to Japan on day four.

This is a blockbuster you feel will live up to the hype.

This can be considered somewhat of a surprise semi-final match-up even though it is a battle between the No.2 seed and the FIBA 3x3 World Cup 2019 champions.

But both deserve their spots after strong campaigns with ROC's dominant pool stage being only blighted by tight losses against USA and France.

ROC were overshadowed by other teams coming into Tokyo but have meant business from the get go and are well led by 23-year-old star Olga Frolinka, who was the joint leading scorer in the pool stage.

They should feel confident having delivered a 19-9 thrashing over China on day one but the No.3 seed has clicked into gear since then.

A depleted China were largely written off heading into the Olympics but their depth of talent has been underlined by an even team performance, where they haven't needed to rely on star Zhang Zhiting.

The dynamic Wang Lili has been spectacular and tapped into her bag of tricks during a sizzling quarter-final against Italy, where she poured in 11 points.

Young guns Shuyu Yang and Wan Jiyuan have not feared the big stage and played with great maturity to complete a well-rounded China team.

Little seems to separate these teams who are looking for the last laugh at their critics.