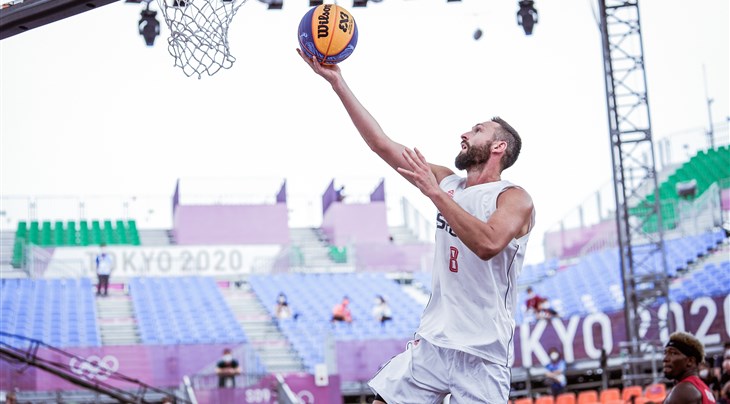 TOKYO (Japan) - Serbia continued to dominate the 3x3 men's Olympic competition with an impressive 22-16 victory over rival Latvia in a high-quality clash on day three.

In a match-up that may well be a gold medal preview, Serbia had all the answers with Dejan Majstorovic (11 points) starring and maintaining Serbia's perfect record in Tokyo. Their sixth straight win has given them a stranglehold on a semi-final spot.

No.3 seed Latvia dropped to 3-2 as they wore down on a hot day in Tokyo.

Lasmanis puts on a show

It's a sight 3x3 fanatics are well used to. Karlis Lasmanis and Dusan Bulut - two of the best to ever do it - exchanging two-pieces from the get go.

A pumped up Lasmanis showed off his supreme athletic ability by driving to the rack for the and one. He showed off the full arsenal with a one-legged mid-range jumper to score Latvia's first five points.

Nauris Miezis is known as 'Robin' but the No.1 ranked player has often been the main superhero on the court. He showed just why in a purple patch, where he buried a couple of two-pieces mixed with a huge block on the taller Aleksandar Ratkov.

He borrowed Lasmanis' cape but Latvia could not shake off Serbia.

Majstorovic aka 'the Maestro' had struggled for some time on the pro tour but has rediscovered his best in Tokyo.

In this much-hyped contest, the sweet shooting Majstorovic wasn't just showing off his stroke - he was mixing it up inside to draw fouls.

He then sealed the deal with two massive shots from beyond the arc to ensure Serbia won well before the time limit in a major statement.

The question remains : Can anyone beat Serbia?