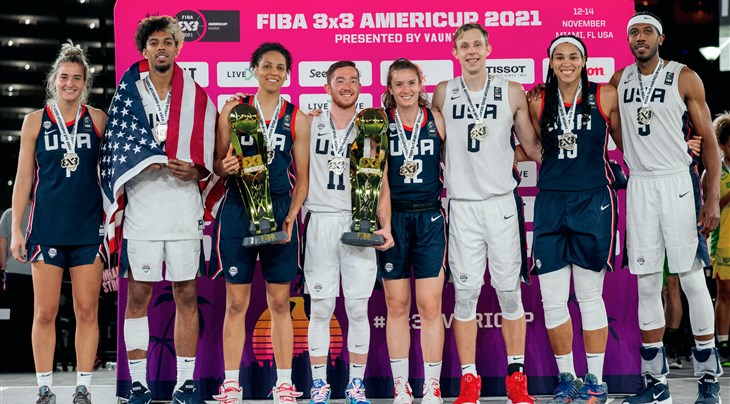 In the men's category, World Cup 2019 winners United States overcame their biggest challenge of the tournament in the final against Brazil (21-15).

24-year-old Charlie Brown Jr. was named MVP of the tournament after leading the U.S. in scoring with 41 points, including 6 in the final. He was joined on the team of the tournament by Brazil's André Ferros and Diego Moquete, who led the Dominican Republic to a historic bronze medal after an absolute thriller against Puerto Rico in the third-place game.

In the women's category, the United States and Brazil met again, with history repeating, this time 21-9 for USA.

US star Brionna Jones took home the MVP award after topping the scoring charts with 41 points in 5 games. She featured on a team of the tournament, which also included Brazil's Sassa and Canada's 3x3 star Michelle Plouffe.

Besides their two silver medals, Brazil also clinched a ticket for both their teams to the FIBA 3x3 World Cup 2022, which will take place in Antwerp, Belgium on June 21-26 (since the two U.S. teams had already qualified).

Wilson is the Global Ball Partner, Peak was the FIBA 3x3 AmeriCup 2021 Apparel Partner and Tissot the Official Timekeeper of FIBA 3x3.