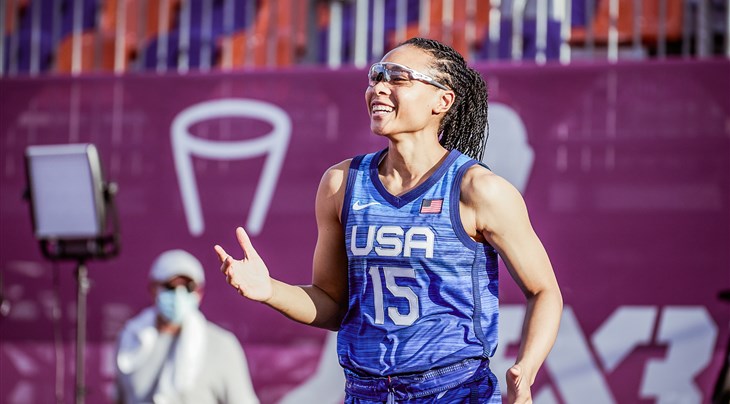 TOKYO (Japan) - USA fought off a determined challenge from Russian Olympic Committee (ROC) to record a 20-16 victory and remain unbeaten in a top of the table clash in women's 3x3 Olympic action.

USA came out cold and trailed for most of the blockbuster contest before they rediscovered their best in the clutch.

The gold medal favorite had been unchallenged in their opening three games before being made to work against a gritty ROC.

Even though they are seeded No.2, ROC weren't as favored as others but had made a statement with three straight victories to start their Olympic campaign before running out of steam against USA.

🇺🇸 @usab3x3 battle to come from behind and keep their perfect record at #Tokyo2020 with a W against R.O.C!#3x3 pic.twitter.com/tK5D2vGHok

Anastasiia Logunova was a late starter in the earlier game against Mongolia but she was ready to go here with 3 quick points as a slick ROC stormed out to a 5-2 lead.

USA looked uncharacteristically out of sorts with just 3 points in the opening three minutes before Kelsey Plum hit a two-piece to break the shackles.

ROC were doing nearly the impossible and locking up this star-studded USA team. But they couldn't power ahead largely due to brilliant defending from Allisha Gray, who protected the rim superbly through eye-catching athleticism.

USA looked in big trouble down 14-11 but Gray was irresistible and her standout game continued with a tough step back from the corner to beat the shot clock and give her team the lead.

Their momentum then overwhelmed a brave ROC.

With Plum struggling from two, Gray stepped up with a brilliant all-round performance to finish with 8 points, 3 blocks and 6 highlights.