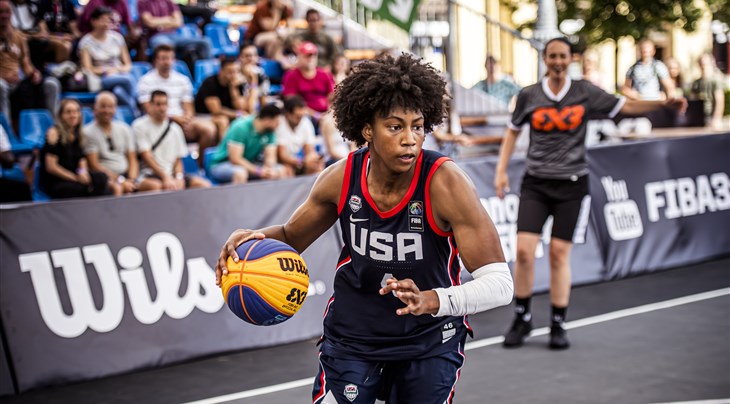 DEBRECEN (Hungary) – The opening day of this year’s FIBA 3x3 U18 World Cup was full of excitement and intrigue as teams looked to make a statement to start the competition on August 24 in Kossuth Square.

Ukraine, Egypt and Belarus went undefeated in the Men’s competition, as did USA, Hungary and Estonia in the Women’s tournament, alongside plenty of individual highlights.

Let’s take a closer look at the opening day’s action in Hungary.

The reigning champions showed why they hold that title with two dominant performances against Belarus and Slovenia, as a good mix of outside shooting and interior excellence saw them to two comfortable wins. Ayanna Patterson showed her hops in the warm-ups as she regularly rattled the rim, and although we didn’t see an in-game throw-down from the USA star, it’s something to keep an eye out for through the week! A perfect 44 points scored with only 20 conceded signaled a very impressive start to the competition for Ukraine, as they brushed aside Kazakhstan and Brazil with performances full of highlights. Vladyslav Semerych threw down a vicious poster dunk over the towering Daniel Lima to put an exclamation mark on Ukraine’s win over Brazil, and the Europeans will be full of confidence when they take to the court again on Day Three of action.

Slovenia would have liked a better performance against the USA, but a win against Mongolia in their first game gives them something to build upon, and the electric shooting of Berus in the two games to rank joint-top of all women’s tournament’s scorers will be key to any future improvement.

Ukraine were faultless on Day One and so was there star man, Semerych. He put people on posters, he distributed well, defended excellently and inspired his team to hit 22 points twice. If he and Ukraine can continue this form throughout the week then they will threaten to win the competition.

Daniel Lima brought the highlights for Brazil on Day One of the Men’s competition, as he used those rocket-powered legs of his to block or dunk any ball that came near the basket!

Lima throws it down for Brazil against Ukraine at the #3x3U18 World Cup! pic.twitter.com/WLLhhrlFcL

USA doing it all

Whatever the USA Women’s needs to do to win, they did – interior power or perimeter excellence, they always had an answer, and went undefeated as a result.