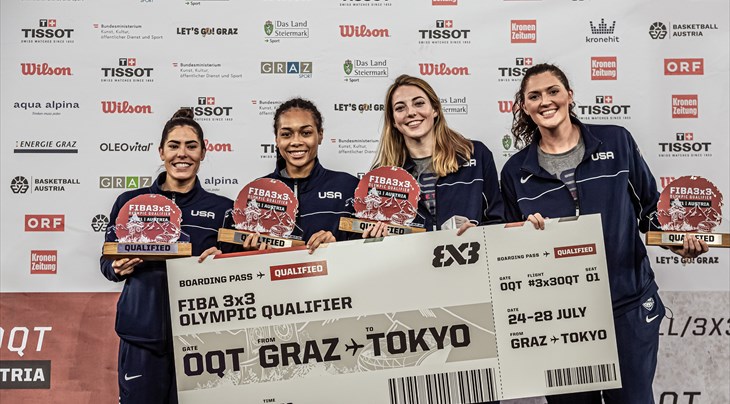 TOKYO (Japan) - The roster is set for USA women’s 3x3 team heading to Japan, welcoming back the fearless foursome that went undefeated at the FIBA 3x3 Olympic Qualifying Tournament in Graz. Austria on May 26-30, 2021.

Let’s take a closer look at the team going for gold, featuring 4 players who currently compete in the WNBA:

"USA Basketball is very proud to announce the first U.S. Olympic 3x3 Basketball Team," said Jim Tooley, USA Basketball CEO. "These four players not only are outstanding athletes, but they will be excellent representatives for our country in this new Olympic discipline. All four have significant USA Basketball experience and most recently won the FIBA 3x3 Olympic Qualifier, which earned this 3x3 berth to Tokyo."

At the Olympic Qualifying Tournament in Graz, Austria, the USA finished 6-0, with Allisha Gray leading the team in scoring with 39 points. It was a balanced effort for the red, white, and blue, as every player scored at least 22 points during the event. Kelsey Plum also earned all-tournament honors, putting on a passing clinic and dazzling everyone in the stands on and the gram.

Kara Lawson, the head women’s basketball coach at Duke University and a Team USA’s coach/advisor since 2017 is excited to see what these four women will accomplish on the international stage.

"I’m thrilled for these four women, all first-time Olympians!" said Lawson. "Their dedication these past 18 months to help position USA Basketball in Tokyo is being rewarded. Now, the real work begins. I’m confident that this group will be able to put together performances that represent our standards. This will be our most challenging tournament to date, but I love the competitors that we are bringing with us."

The action tips off at Aomi Urban Sports Park from July 24-28 with the pool stage being played from July 24-27. The knock-out games will start on July 27, and the semi-finals and the medal games are set for July 28.