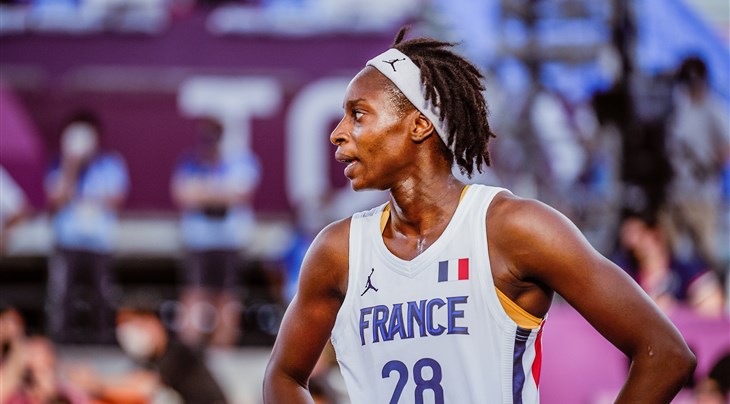 PARIS (France) - On the grandest stage of them all, No.1 seed France had seemingly revived their stuttering Tokyo Olympics campaign with a big effort on the pivotal day 4 to reignite their gold medal dreams.

Of course, it was a pumped-up Migna Touré who got France back into top gear with an 11-point explosion in France's last pool game against Romania before a solid team effort pushed them past host Japan in the quarters.

Having long been a powerhouse and dominant in the Women's Series, France fancied their chances against star-studded USA in the semis - a clash many had predicted to be the likely gold medal game coming into the Olympics.

France's defense limited the USA's firepower but Touré and her partner-in-crime Laetitia Guapo went cold when it mattered most as the Americans prevailed in a thriller. Their gold medal dream was over but France still had a chance to finish on the podium. The bronze medal game against China was a slug fest as both teams were nervous with so much at stake.

Touré shouldered the burden and she kept France in the game with fierce drives to the rim. But it was to no avail as China won 16-14 and the world No.1 went home empty-handed.

"We had a tough Olympics and it didn't quite go our way," Touré said.

The former No.1 player in the world was inconsistent at times but still finished fourth overall in scoring in Tokyo with 54 points from 10 games.

While disappointed to fall short she still relished the experience of a lifetime in Tokyo.

"I'm really grateful," she said. "It was the biggest tournament I have ever played. For me that was my goal and I'm proud to have achieved that."

France have taken time out since that painful defeat but the heartbreak of Tokyo is set to make them stronger as they return for the FIBA 3x3 Europe Cup 2021 on September 10-12 at home in Paris.

"We are motivated to have a better result in the Europe Cup and make our country proud," Touré said.

France will be gunning for a historic three-peat of titles at the event having won in 2018, where Touré was named MVP, and 2019. It will be an especially memorable occasion for France playing in front of their home fans and in the surrounds of the iconic Eiffel Tower.

"It is exciting to play in front of our fans," Touré said. "I was even ok playing without fans because I was so grateful just to be playing. But this will be a special event and it should be a lot of fun."

The 1.80m (5ft 11in) Touré has been a 3x3 women's pioneer ever since she first became addicted to it in 2015 before she represented France a year later.

Ever since then fans have been captivated by this wizard who can do it all and is especially mesmerizing when she pulls off trick shots while being heavily contested at the rim.

The Women's Series 2019 MVP has a certain style and swagger when she steps out on the court but it's her strong grounding that is key.

"I always stay humble and proud," she said. "I fell in love with 3x3 and love playing it."

The Europe Cup in some ways will be a snapshot of what lies ahead in 2024 when 3x3 has its Olympic encore after a highly successful debut in Tokyo.

With the 2024 Games in Paris, Touré can't help imagining what it will be like playing in a home Olympics.

"It will be amazing. A lot of people discovered 3x3 in Tokyo so I think in Paris it will be even more popular," she said.

"But three years is a long time and you never know what will happen. I'll just continue working until then."

In the meantime, Touré will be going all out in a bid to make fans once again fall head over heels for this France team in the city of love.