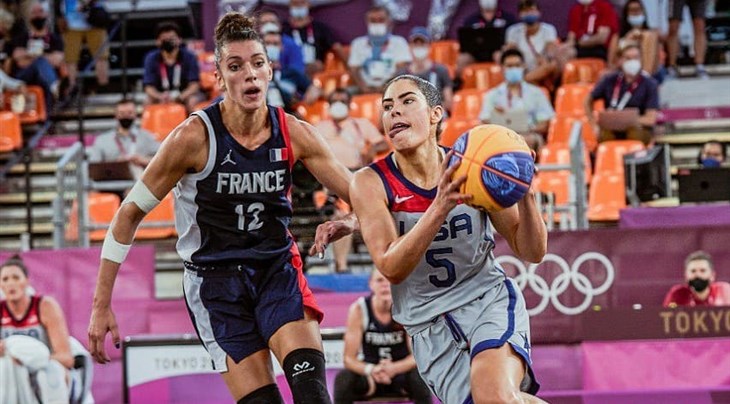 MIES (Switzerland) - The 3x3 women's game went to new heights in 2021, as we crowned our first-ever Olympic gold medalists in Tokyo and we welcomed back the Women's Series to the fold. Here are the top five teams that made it a great 2021 season.

It was a good year for USA Basketball in 3x3. They began the year by winning the Women's Series Klaipeda Stop, their first-ever Women's Series win, but that was just a preview.

After qualifying for the Olympic Games, the team, led by 4 WNBA stars went to Tokyo, overcame all the obstacles, including a pool stage loss against Japan, and won the first-ever 3x3 gold medal thanks to the inspiring play of Allisha Gray, Kelsey Plum, Stefanie Dolson and last-minute call-up Jackie Young (not to forget OQT star Katie-Lou Samuelson and team coach Kara Lawson)

USA capped off a great year by winning the inaugural AmeriCup 2021 on their home turf, earning the gold medal and securing themselves as the best team on the continent.

Oh and yes their success extended to youth competitions as they won the FIBA 3x3 U18 World Cup.

The ROC was brilliant at the Tokyo 2020 Olympic games, winning the silver medal and coming up just short against powerhouse USA. The team was led by the Frolkina twins, two up-and-coming 3x3 talents that are sure to be a mainstay of the Women's Series and international competition for years to come. They finished fourth at the Europe Cup 2021 to finish out the year well, and will undoubtedly bring their top talent to the 3x3 World Cup in 2022.

Germany took a major step forward in their 3x3 ambitions in 2021. Despite missing out on the Tokyo Olympics, the team was impressive on the Women's Series, winning at the Constanta Stop and finishing off the year with the ultimate prize, winners of the Bucharest Final. Sonja Greinacher led all players in P-VAL and S-VAL for the season, while Svenja Brunckhorst was second in highlights and key assists.

They also earned a silver medal at the 3x3 Europe Cup 2021, proving that they are here to stay for the long term. International competition continues to heat up in women's play, and we look forward to 2022 where the world's best return to test their talents on the biggest stages.

We didn't see China at the Women's Series this year, but they made their mark at the Olympic Games in Tokyo, earning the bronze medal. They were one of the few teams that didn't need to earn their spot via the qualifying tournament, so we didn't know what to expect from a team that had not played together in some time.

At the Olympics, they defeated France, one of the favorites coming in, for the bronze, thanks to top play from Lili Wang, the co-leading scorer during the event with 55 points. China continues to be one of the best 3x3 nations in the world, and we hope to see more of them in 2022. What a year it was for the Spaniards. Following the disappointment on missing out on the Olympic Games, the women reached another gear in 2021, winning at the Women's Series Mies and Montreal Stops, followed by the gold medal at the Europe Cup 2021 at the senior level and also in youth competitions at the U17 Europe Cup.

It was a standout performance for the country, which saw Sandra Ygueravide rise to the number one player in the world and earn FIBA 3x3 Women's Series 2021 MVP honors.

The top team in the women's 3x3 game for years, France won the Women's Series Voiron and Poitiers Stops, advanced to the Olympics, where they finished fourth, and earned a bronze medal at the Europe Cup 2021. Oh and let's not forget their title at the FIBA 3x3 U23 Nations League. It was not the year they hoped for, but another one filled with more trophies.

They were the only team to defeat the US at the Tokyo Olympic Games, putting on a show on their home soil. It was a coming out party for Stephanie Mawuli, who proved to the world that at only 23 years old, she is one of the next great 3x3 stars. She was the MVP of the FIBA 3x3 Olympic Qualifying Tournament as well.