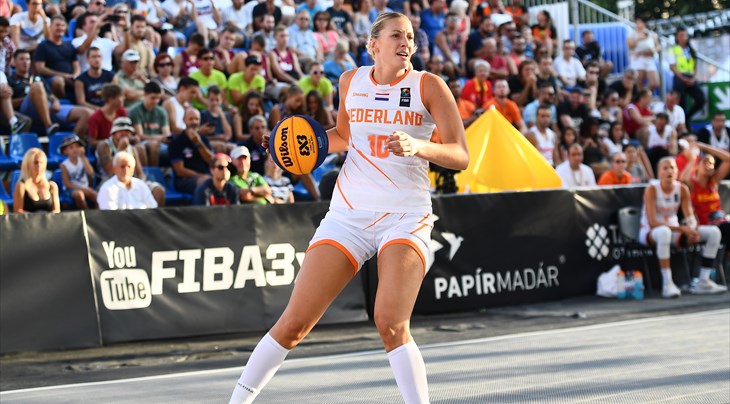 PARIS (France) - The best European female hoopers will showcase their talents in an iconic venue as the FIBA 3x3 Europe Cup returns on September 10-12, 2021.

After an absence last year due to the Covid-19 pandemic, Europe's premier 3x3 competition returns with a bang in the surrounds of the world famous Eiffel Tower.

To get you in the mood, let's look at 12 women you must keep an eye on.

At just 23 years of age, there is a lot of expectation on this Belgian 3x3 baller. And with good reason.

The tall 1.86m (6ft 1in) Resimont impressively led Belgium at the FIBA 3x3 Europe Cup qualifier in Israel where she scored 19 points in 3 games.

The lefty has a beautiful stroke from long range, especially for a player her size. But she can also put the ball on the floor, attack the rim and finish from mid-range or at the rim, with beautiful footwork. Absolute baller alert!

Does she still nice an introduction? The 1.80m (5ft 11in) Touré has been a bone collector for four years on the 3x3 circuit. She's a rare example of someone who's been able to mix form and substance, with both sick ridiculous and highlights and a sick ridiculous trophy cabinet.

The Women's Series 2019 MVP has not missed a beat this season taking out top honors in Voiron and she tried her best in France's disappointing Tokyo Olympics campaign with a team high 54 points from 10 games.

Touré will be leading France's charge for a third straight Europe Cup crown and she wants to add a second MVP having collected the prize in 2018.

You just know she'll put on a show for the home fans.

The towering 1.88m (6ft 2in) Greinacher will arrive in Paris in hot form having led Germany to their first Women's Series title with a triumph in Constanta.

Greinacher dominated almost all the statistical categories and when she's feeling it there's not much the opposition can do, particularly on the glass where she's at her meanest.

In knockout games against Spain and USA, the 29-year-old grabbed an incredible 20 rebounds - that's one per minute! - to provide the edge for Germany.

There won't be many more intimidating players than Sonja Greinacher in Paris.

The 1.73m (5ft 8in) dynamo makes it look eaaaaaaaaaaaaasy every time she steps onto the court. After all, there's a reason why she's called 'The Magician'.

She can make the Wilson talk and defenders cry. But 2021 has been tough for Hungary who agonizingly missed a ticket to Tokyo in the dying seconds against Italy of the UOQT at home.

No doubt it's taken a while to recover from that painful bitter, but Hungary should be out for revenge in Paris.

And Medgyssey wants her second Europe Cup title having tasted success in 2016, when she won MVP

This lethal Lithuanian was superb in the FIBA 3x3 Europe Cup qualifier in Romania, where she finished third overall in scoring with 18 points in 3 games as Lithuania clinched one of the last tickets to Paris.

However, the 1.81m (5ft 11in) sharpshooter had an off performance at home in Klaipeda as Lithuania had an early exit.

If she can rediscover the form of Romania then Lithuania could make some noise in the city of love.

Natalie van den Adel is not fair. At a towering 1.88m (6ft2in) she can score easily over smaller defenders but also has the handles of a player a foot shorter.

And she absolutely loves the Europe Cup having starred three years ago as the overall top scorer to lead runners-up Netherlands. Her efforts were rewarded by making the team of the tournament.

The Dutch Master will be eyeing going one better in Paris.

Talk about some savvy vet moves. The 35-year-old can toy with defenders down low through expert foot work and her long arms.

She will be relied upon to get buckets for fancies Romania, who had a disappointing run in Tokyo.

Sipos wasn't part of that campaign and she might be the missing ingredient for the No.3 seeds who are looking for some silverware.

The 24-year-old is part of the young talent boom of Russian 3x3 and she shone brightly in Tokyo, where she helped ROC win silver.

On the biggest stage in sports, Kozik finished fifth in scoring with 53 points from 9 games and she's also starred for Russia U25 in Voiron and Poitiers.

The 1.76m (5ft 9in) trickster also loves throwing a crazy dime. Let's already pencil her in our top 5 plays.

Red-hot Spain will arrive in Paris with a swagger after claiming the title in Montreal. Such a team effort that they didn't really need star Ygueravide to get out of first gear in an ominous warning for opponents.

We all know how devastating this speedy Spaniard can be after her dominant MVP run in the Women's Series opener this season in Mies.

And she has happy memories of the Europe Cup having led Spain to a silver medal two years ago where the 1.72 (5ft 8in) dynamo featured in the team of the tournament.

It's already been an incredibly successful 2021 for Spain and they should be eyeing a first Europe Cup crown knowing they have Ygueravide - one of the best big game players around.

The dynamic 23-year-old could be one of the breakout stars in Paris having enjoyed a purple patch of form.

She's starred in the FIBA U23 Nations League 2021 and played a key role in Ukraine booking their ticket to Paris at the qualifier in Romania.

Remember the name because Nataliia Tsiubyk is headed for stardom. Non-traditional hoops nation Great Britain were one of the success stories after qualifying for Paris with a dazzling run in the qualifiers in Romania.

Leading the newcomers charge was the highly-decorated Temi Fagbenle who represented Great Britain in basketball at the London Olympics.

The 1.93m (6ft4in) athletic marvel has taken to 3x3 like a duck to water to be one of the most accomplished ballers in Paris having previously played in the WNBA.

They may be big underdogs in Paris, but Great Britain may just prove to be the Cinderella Story behind the efforts of their superstar.

The cold-blooded Baron lives for the big moment. In the Europe Cup qualifier at home in Tel Aviv, she hit a huge go-ahead two-pointer with 17 seconds left to lift Israel past Switzerland and a book a ticket to Europe's premier competition.

The 1.78m (5ft 10in) Baron was lights out in Tel Aviv averaging 7.7 ppg and also played well in Klaipeda to illustrate that she's the heart of Israel's team.

And you know if the game is tight where the ball will be headed.