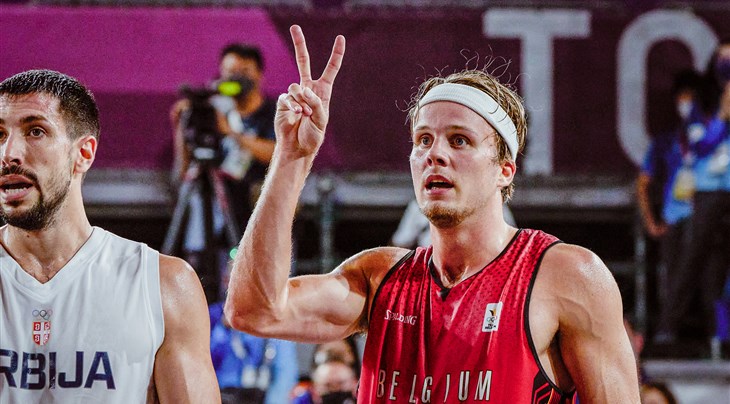 PARIS (France) - The most important 3x3 competition for national teams in Europe returns in front of an iconic venue at the FIBA 3x3 Europe Cup on September 10-12.

After an absence last year due to the Covid-19 pandemic, the tournament returns in style in the gardens of the Trocadero complete with a magnificent view of the world famous Eiffel Tower.

To get you even more hyped, let's find the 12 men's players you just have to watch.

It's Krammer Time! Move over Schwarzenegger, Austria has its new action hero with this dunking sensation loving nothing more than kramming the rim.

The 2.02m (6ft 8in) Krämer is powerfully built and there isn't much you can do when he's in attack mode. But he doesn't just play bully ball because he has a mean jumper and scores whenever he feels.

He has helped put Austria on the 3x3 map quickly since Graz appeared on the World Tour 12 months ago.

Krämer can prove he is so much more than a human highlight reel if he can lead Austria deep in the Europe Cup.

It's hard to believe this one-man show has only been entertaining us this year. It feels like Thibaut Vervoort aka 'Must See TV' has been part of our viewing habits for ages.

Vervoort has been tearing up the pro circuit (top scorer on the pro season) where Antwerp are now one of the leading teams having made two Masters semi-finals on the World Tour and three Challengers titles.

The 23-year-old also led underdog Belgium to an impressive fourth-placed at the Tokyo Olympics but you feel he won't be satisfied with anything less than a podium finish in Paris.

He can do it all. This Belgian bad man is lights out from deep, he even nailed six - yes, six! - twos in a recent game at the Montreal Masters but he can also dunk the rim like he's auditioning for the next Space Jam movie.

Vervoort loves the big stage, so watch out for him in Paris!

He will arrive in hot form having dominated local events back home and loves performing for his country after an eye-catching display in the Europe Cup Qualifier in Romania to lead Estonia to a spot in Paris.

Remember the name because Karl Lips might be the kiss of death for opponents. And if you want the name of the writer who's making these lips puns, I won't say a word: my lips are sealed. The home fans will go crazy for this excitement machine who will lead the Europe Cup 2019 silver medalist's charge to go one better on home soil.

The 24-year-old star will be undoubtedly a fan favorite in Paris but could emerge a hero if he leads France to the promised land.

The 20-year-old is fast becoming a 3x3 rising star after several outstanding performances this year.

He appears a natural on the big international stage underlined by scoring 18 points in 4 games at the Europe Cup Qualifier in Israel, where the hosts were undefeated.

It has fuelled strong expectations and it's pressure that Palatin should be able to handle with ease. The 1.99m (6ft 6in) Tarvydas will come into Paris confident having been part of Sakiai Gulbele's semi-final finish at the recent Debrecen Masters.

He scored 23 points from 4 games to be a key cog of Sakiai's well-oiled machine and once again proved he is is one of the best in the business from outside the arc. Earlier in the year he memorably won the shoot-out contest in Doha.

Tarvydas wasn't part of Lithuania's bronze medal winning outfit at the Europe Cup two years ago but will surely have the motivation to get his country back onto the podium. After all, seven years ago, when most of you didn't know 3x3 even existed: he was on the team that won bronze for Lithuanian at the first-ever FIBA 3x3 Europe Cup in Bucharest.

He's known as 'Dimes' but this Dutchman is the ultimate walking bucket. When his high-profile Amsterdam Talent&Pro teammates couldn't hit a shot at the Debrecen Masters, it was the reliable 'Dimes' who carried the scoring load.

And he'll be relied upon in Paris, where the Netherlands are hoping to make a deep run having fallen short of a podium finish in Tokyo.

Van der Horst, typically, led the way for the Netherlands with a brilliant 51 points from 8 games and if he can match that effort in Paris then they might just paint the Eiffel Tower orange. No list is complete without arguably 3x3's greatest ever showman Michael Hicks aka 'Money in the bank'.

He tried to inspire Poland in Tokyo with a team-leading 41 points from 7 games but they exited early.

After that letdown, where Hicks had stated his only goal was to win a gold medal, Poland should be extremely motivated to redeem themselves in Paris.

Having steeled himself for weeks now, Michael Hicks will be locked in and raring to fire at the Europe Cup.

There won't be too many stronger players than this beast who stands at 2.04m (6ft 8in).

The 24-year-old was unstoppable inside during ROC's silver medal run at the Tokyo Olympics, where Karpenkov scored 51 points in 10 games.

It underlined the young talented core of Russia built from their success at the FIBA 3x3 U23 World Cup 2018 and 2019 - where Karpenkov finished second top scorer.

Russia's young guns clearly love playing with each other and it's little wonder when they've got almost an automatic bucket down low when Karpenkov feasts under the basket. Not gonna lie, it's definitely gonna feel weird to have a Serbian team without Dusan Bulut or Dejan Majstorovic for the first time in Europe Cup history. But with the bulk of the Liman team starring Olympians Mihailo Vasic and Aleksandar Ratkov, not to mention Stefan Kojic AND the Ub star and Debrecen Masters MVP Miroslav Pasajlic, the Serbs should be in a good place.

The 26-year-old has been a star on the Enlio court the minute he introduced himself to 3x3, with a mixture of long balls, step backs and no-look dimes. The guy has proved he's not scared on any stage so we're not worried about him doing it for the first time with the Serbian flag on his chest.

The 'Sphinx" is the grand master of the World Tour and still punking opponents half his age.

Few players have a bag as deep as the OG Slovenian baller, who can still cross them up and embarrass defenders.

Like a bottle of Merlot, 41-year-old Finzgar keeps getting better with age as he showed at the Debrecen Masters with a team-high 19 points in 6 games.

You can just pencil him in to feature in our top 5 plays. The 25-year-old has been in strong form back home and he's promised to light up 3x3 ever since starring in Ukraine's second-placed finish at the FIBA 3x3 U23 World Cup 2019, where he scored 44 points from 7 games.

The electrifying versatile talent is ready to make his mark on 3x3 at the top level and has the perfect opportunity to do so in Paris against Europe's best.