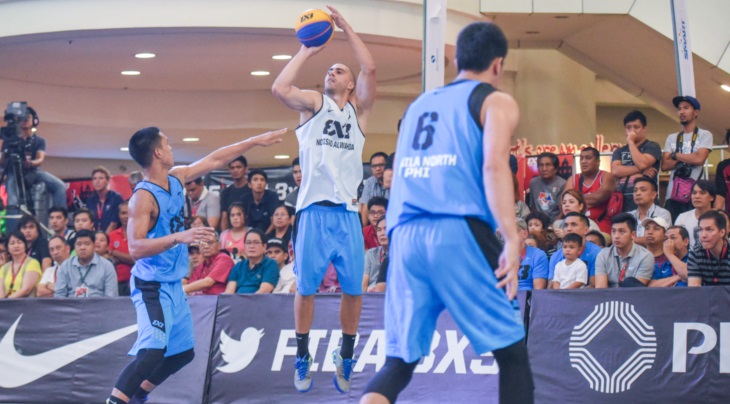 NOVI SAD (Serbia) - Since their first tournament together in 2013, until their final games in 2020, Novi Sad has been the best team in 3x3. Let's look back at 10 of their greatest games during their reign of dominance.

The best 3x3 team of all time actually did not qualify for the first edition of the World Tour. Their debut only happened on the second year, in 2013, and started terribly. The Serbs hardly made it out of the pools (1 win, 2 losses). After that, everything changed. Novi Sad came back early the next morning (the games were played earlier because of the rain), beat their nemesis from Piran (then called Ljubljana) before taking down (20-15) a veteran Bucharest team, which featured one of the first stars of 3x3, Angel Santana. Dusan Bulut scored a game-high 9 points and flashed a crossover dribble, we soon got very familiar with.

Just six weeks after Prague, Novi Sad were competing in their first World Tour Final, an event in which they would compete each year for the rest of their existence (and win 4 times). Let's not mention the title game, which ended badly with a loss against Ljubljana (then called Brezovica) from Slovenia. In the semi-finals against another Slovenian team (Kranj), on a freezing cold day in Istanbul, things looked pretty bleak for Novi Sad, who were down 12-9 with 30 seconds to go. This is when ‘Mr. Bulutproof’ took over. First, he hit a 2-pointer to make it 11-12, and then hit a step-back 2-pointer just before the buzzer for one of the best comeback wins in 3x3 history.

You look on the World Tour website and you'd think this win at the Manila Masters was a walk in the park for Novi Sad. Every single game won by 7 points of more. This said, that title game against Manila North will forever remain one of the most difficult games for the Serbs. It wasn't a 3x3 game, more like 3 against 3,000 as fans had come from all over the city to attend the game in Robinsons Place, one of Manila and Asia's biggest shopping malls. Hostile crowd and hostile opponent, playing against a very physical Filipino team. To give you an idea, here were the nicknames of Manila North's 2 stars: "The Beast" (Calvin Abueva) and "Muscle Man" (Vic Manuel). Things got chippy and Marko Savic had to moonwalk off of an altercation with the entire Filipino team. The inexperienced Manila North conceded an incredible 13 free throws. Free money for Bulut, who sank his 7 attempts. Dejan Majstorovic was the game's top scorer with 10 points, including 4 swishes from behind the arc. The Filipino fans - who obviously cheered VERY loudly for Manila North - showed they recognized game by applauding Novi Sad's win and asking for a record number of selfie and autographs to Bulut and company.

Maybe Novi Sad's most iconic comeback win. At the 2015 Abu Dhabi World Tour Final Novi Sad was looking for their second consecutive championship but ran into Simon Finzgar and Trbovlje (SLO) in the semi-finals. Down 2 with a few seconds to go, Bulut went "Queen's Gambit" mode. He lured the help defender on a drive and kicked out to an open Majstorovic, who calmly hit the open J as time expired. In overtime, Bulut finished the work by simply burying the winning two-point shot over Finzgar's outstretched arm, off the check-ball. Only in 3x3, only with Novi Sad. The Serbs went on to beat Kranj (SLO) in the final for the first repeat in World Tour history.

Since nobody in 3x3 seemed to beat these dudes, why not bring some marquee basketball names? Enter Al Gharafa (QAT) featuring several well-known international players like Jeremiah Massey and Kevin Galloway. This team seemed like the biggest test for Novi Sad in a long while at the Utsunomiya Masters and the score was tied at 16 with a littler over 2 minutes to go. After a Marko Zdero two-pointer, the Serbs were up 19-17. Sammy Monroe (who was a perfect 9-9 from inside the arc in that game) switched to lock up Bulut. "Mr Bullutproof" responded with one of his most epic step-back jumpers, right on Monroe's grill. It also led to one of the most iconic team celebrations in 3x3 history. Try watching without getting emotional. Oh and yeah, they won their next 3 games and won the Masters.

We go back to Japan one year later for the final of the Utsunomiya Masters and Novi Sad are pushed to an overtime against their old Slovenian rivals of Piran. That team just dominated Novi Sad on the glass (28 to 14) and had a shot to win it in regulation but Gasper Ovnik's shot fell short. This time in overtime it wasn't Bulut playing closer. He dove on the floor for a loose ball and found a streaking Marko Savic. The best passer on the team this time played finisher and went on to score the winning lay-up. Fun fact: Novi Sad won all 4 of their World Tour events played in Japan in their history. Not a bad omen before the Olympics, where the team plans to reunite under the Serbian flag.

In the midst of their perfect season, they faced off against Liman in a matchup of the top two teams. That Novi Sad - Liman rivalry was like none other for the Serbs considering Liman is actually the name of the neighborhood where Bulut and Savic grew up. In the iconic location of the Lausanne Masters, Novi Sad looked like they were going to calmly continue their undefeated run. But Liman star Stefan Stojacic aka 'Mister Robot' hacked the Novi Sad code and tied the game at 20 on yet another 2-ball. The Swiss fans were on their feet when his teammate Aleksandar Ratkov missed a layup, Novi Sad got the ball back and Marko Savic hit a clutch contested shot at the rim.21- 20. Game over.

Need a clutch bucket? Call on ‘The Maestro’. Novi Sad had their backs against the wall at the Hyderabad Masters in India, down 20-18 against Riga (LAT) after a Karlis Lasmanis 2-pointer with 2:27 remaining. They wouldn’t allow another basket for the rest of the game. Bulut brought them to 19-20 and then kicked it out to Dejan Majstorovic for the game-winner. The celebration is iconic and so his Agnis Cavars' angry reaction at his teammate's defensive lapse. I too would have run away from the court in no time.

In the perfect way to end a perfect season, Novi Sad defeated upstart Riga (LAT) again, 20-18 in dramatic fashion. Agnis Cavars missed a 2-pointer as time expired for Riga, giving the Serbs their third World Tour title. It was a full team effort for Novi Sad, with everyone contributing at least three points. They missed their first four free throws of the game, but Marko Savic made their last one, the 20th point, enough to carry them to their 32nd win of the season... in 32 games. To this day, maybe one of the most underappreciated achievement in sports history.

Novi Sad vs NY Harlem at the 2019 Novi Sad Challenger

After steamrolling the competition on their way to the finals, you know that Novi Sad was not going to let the home fans down. They matched up with NY Harlem, who played them tough as nails. Up 19-17, looking to close out the game, it wasn’t their usual duo of Bulut and Majstorovic who sealed the deal, but Tamas Ivosev who grabbed the offensive board, lined up the corner 2-point and said, anything Dusan can do, I can do better. He was properly mauled by his teammates and given a hometown hero treatment.