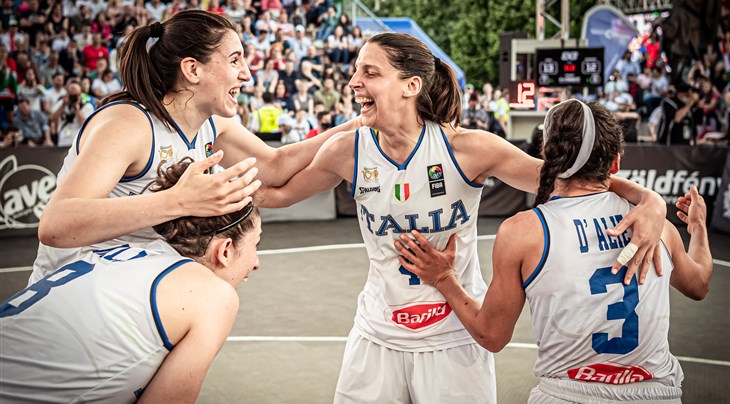 We already settled the first 14 teams through the FIBA 3x3 rankings and the Olympic Qualifying Tournament, but we had two more spots to give away in Hungary. In front of a passionate, packed crowd, we had enough Tissot Buzzer Beaters to open a department store.

After two days of elite competition, we entered the knockout round on Day 3, with Italy and Belgium earning the final Olympic spots for the women and men. All afternoon, these teams had us sweating like a cold drink on a hot summer day. A three-woman Chinese Taipei team got hot at the right time, defeating Estonia in the quarterfinals, before being bounced by hometown favorites Hungary in the semi-finals.

Italy, who was on a redemption tour, followed their leader, as Rae Lin D’Alie took care of the Netherlands in the semi-finals before hitting the biggest shot of her life, a Tissot Buzzer-Beater to fulfill her Olympic dreams. As she stood there, thanking everyone that made it possible, she had one final message. “Italy, this one’s for you!”.

On the men’s side, it was close like a straight-edge shave. Belgium’s game was flowing sweet like chocolate, even if they left a bitter taste in Hungary's mouth.

They went undefeated throughout the entire Universality Olympic Qualifying Tournament, knocking off Mongolia in the semi-final on a Tissot buzzer beater before defeating the hosts Hungary in the final. They shocked the field, and are now going to live out their wildest sporting dreams.

The qualifiers are in the book and we now know our field. Let’s take a look at the teams going to Japan and how they got there.

The 3x3 competition at the Olympic games will take place from July 24-28 at the Aomi Urban Sports Park.