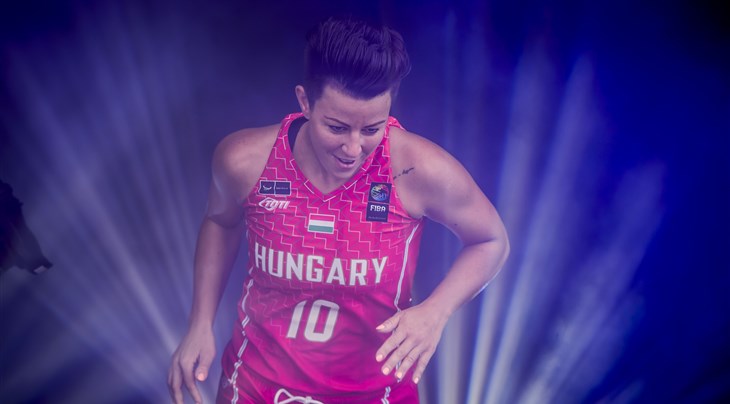 GRAZ (Austria) – There will be Wonder Women in droves at the looming FIBA 3x3 Olympic Qualifying Tournament on May 26-30.

The best 3x3 players will be in Austria to fulfil their Olympic dreams and here are 10 of the best.

There is good reason why this Australian dynamo is a FIBA 3x3 ambassador. She represents everything great about the 21-point game – highly entertaining, swag and passionate.

The bubbly 29-year-old is the heart and soul of Australia – one of the very best 3x3 nations but who don't play as often as others being based Down Under.

It's been a while but you can bet Cole has lost none of her old magic as she leads Australia's charge in Austria.

And she'll be even more emotional in Graz knowing her beloved father will be cheering her on in Melbourne.

Have you heard of Anastasiya Sushchyk? You will soon because this pocket rocket breaks more ankles than a dodgy trampoline.

The 24-year-old produced one of the great 3x3 highlights with a vicious crossover at the FIBA 3x3 U23 World Cup 2018 that melted down social media.

Belarus has a team stacked full of giants but the 5ft 3in (1.60m) Sushchyk might be the most dangerous of them all.

She's No.1 for a reason. Guapo is one of 3x3's greats having dominated the Women's Series 2019 and her presence means a shorthanded France will still be favored to grab a ticket to Tokyo in Graz.

The 25-year-old is an athletic marvel – you knew that already from the eye test but it's been officially confirmed by the Kingston University in London, where tests showed she could have been an Olympic 100m sprinter, marathon runner or champion cyclist.

Thankfully, she chose 3x3 and her incredible talent will be one of the highlights in Graz.

She's a crossover artist. And a musical artist – trust us, she can spit bars. 'Rae Rae' can do it all and there's good reason why she's one of the most beloved 3x3 players on the planet.

That love was never more on show than at the FIBA 3x3 World Cup 2018 when the Italian wizard won the hearts of hoops-mad Philippines during her magical MVP run.

She might be barely taller than Kim Kardashian but Rae Rae repeatedly proves she's the most intimidating player on the 3x3 court.

Perhaps no player has more pressure than Japan's great hope. Every player in Graz has their Olympic dreams on the line but only Japan have the carrot of playing at a home Games.

The emerging 3x3 power have a serious chance thanks to this 21-year-old's ability to make dreams come true. Yamamoto was the MVP at the FIBA U23 World Cup 2019 to secure Japan's first title in any form of hoops.

If anyone can handle the suffocating pressure, it's this young superstar.

Watch out, this speedy Spaniard is raring to go having tuned up perfectly for Graz with a stunning performance at the Women's Series 2021 stop in Mies earlier this month.

The MVP led all players in player value and finished second in scoring to lead France to a historic first ever Women's Series title.

The 1.72m (5ft 8in) star is crafty and has more moves than Uma Thurman in Kill Bill. While other players might show some rust after a long layoff, Ygueravide has clearly been working hard during the extended break. Hungary was a FIBA 3x3 World Cup silver medalist two years ago and they will be hoping for a podium finish in Graz.

They can absolutely achieve that with such a deadly one-two punch. Cyesha Goree is one half of 3x3's dynamic duo and she was one of the very best players in Amsterdam.

She has the strength to get to the rack at will but can also pull up for one mean jumper. The 1.88m (6ft 2in) has the mindset of constant attack – a philosophy that works perfectly well in the whirlwind of 3x3.

She's the other half of this brilliant tandem. The pick-and-roll between Goree and Medgyessy is a thing of beauty – though a nightmare for confused opponents.

There is a good reason this 1.73m (5ft 8in) baller is often called 'The Magician'. She does things with the ball that should be illegal and quite simply Medgyessy makes it look easy.

If Cole is the heart and soul of Australia then Garrick is the glue that holds it all together. She can do everything on the court and might just be the most skilled women's player in the game.

Like her partner in crime Cole, the 1.8m (5ft 11in) is an inspiration having successfully overcome anorexia as a youngster and ever since she's been a leader in her community.

Being an Olympian would be fitting for someone who has given so much back and you can just bet she's going to leave it all on the court in Graz.

It's just not fair. You might – if lucky – shut down Guapo but France have the luxury of also boasting the dynamic Migna Touré who is often in a battle with her partner in crime for the title of best 3x3 women's player alive.

She won the Women’s Series 2019 MVP and absolutely deserved being a new Wilson ambassador. The 1.80m (5ft 11in) showstopper is unguardable and just when you think you've got her covered at the rack, she will flip it in with the left.

And if you had any doubts about her current form after a long basketball season, she was in MVP mode for her 3x3 season debut at the FIBA 3x3 Women's Series Voiron Stop on May 21-22.

We promised 10 but just had to squeeze in a couple more. If you haven't heard of Satou Sabally, you've been living under a rock.

The Fenerbahçe and Dallas Wings player is one of the most talented ballers in the world but – just as impressively – is a leader in social justice.

The hoops unicorn is single-handedly the reason why underdog Germany can shock the world in Graz even though they are in the 'Group of Death' alongside powers France and USA.

You thought Giannis or Embiid were from another planet, you ain't seen nothing yet because the 1.93 (6ft 4in) Sabally does things that will leave you speechless.

The Las Vegas Aces star is one of the most accomplished players in Graz having been the top selection in the WNBA draft in 2017.

She'll be a key part in USA's charge towards booking a spot to Tokyo – something the hoops power will have a lot of pressure to achieve.

And they should feel confident in the hands of Plum, who is a sharpshooter and a floor general.