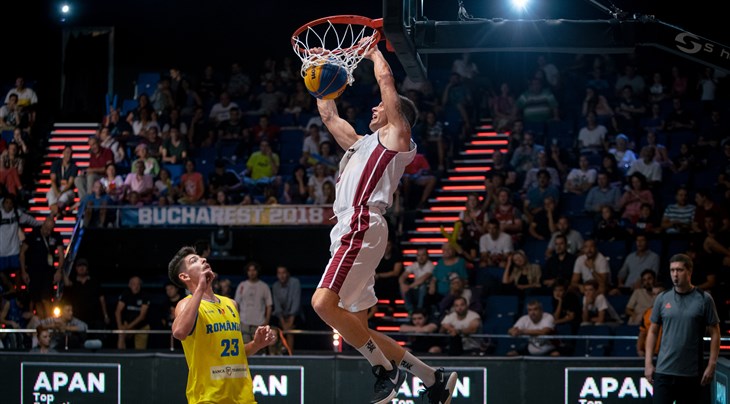 GRAZ (Austria) – You should be more hyped than Drake courtside because dreams are on the line for the 40 teams at the FIBA 3x3 Olympic Qualifying Tournament in Graz, Austria on May 26-30, 2021.

Here are 10 reasons to watch this historic event.

First 3x3 event in Austria! Can the hosts live up to the hype?

What an occasion for Austria to host their first ever 3x3 event! But it's quite fitting and symbolizes exactly what 3x3 is all about.

Austria has never been a major hoops power but 3x3 is starting to emerge there with Graz impressing in the last 12 months. The gutsy World Tour team is a glimpse of what to expect from Austria, who want to be the host with the most.

If you thought Austrians were only good at skiing, it's still time to change your mind. It's 2021 and Austrians are starting to master the 21-point game.

The venue is unreal

This will be historic in many ways with the event to have a strong green and sustainability concept in place. It is fitting for 3x3, which is always aiming to be at the cutting edge of sports and looking to the future. And wait till to say the drone shots to see one of the most scenic squares in the entire country.

Some of the very best 3x3 teams in the world

You want to see most of the best men's and women's teams in action then you've come to the right place.

In the men's, Latvia could start a Marvel franchise through their superheroes Karlis Lasmanis and Nauris Miezis but they aren't guaranteed a ticket to Tokyo underlining 3x3's depth.

Mighty USA have more stars than at the Oscars, while underdog Mongolia might be the best team to root for if you're team isn't in it.

The women's is similarly loaded with France out to prove why they are the world's No.1 team but face stiff competition with the USA stacked with WNBA talent, while Australia always seem to come away with titles when they play.

Some of the very best players in the world

Forget Netflix, this tournament will be nonstop entertainment with an endless supply of talent.

We've already mentioned the Latvian Batman and Robin. Pick your poison with the USA, who have Robbie Hummel, Kareem Maddox and Dominique Jones aka 'Disco Domo' all on ONE team!

Who will be the ultimate Wonder Woman in Austria? It might just be phenom Satou Sabally who is a hoops unicorn or it could be 3x3 mega star Rae Lin D'Alie – about a foot shorter than the German wunderkind – who almost makes fans go cray cray.

France have the ultimate one-two punch with the world's top two players Laetitia Guapo and Migna Toure. Or is Australia's duo of Bec Cole and Maddie Garrick better?

It is always special when hoops-mad Philippines takes the court knowing that they represent the hopes of more than 100 million people back home.

And the Philippines are looming as a dark horse contender to get a Tokyo ticket after Joshua Munzon turned into a one-man monsoon late last year during a golden run.

The No.1 PBA draft pick has become something of a celebrity in the Philippines and he might turn into a global phenom if he leads his country to glory in Austria.

But he won't have to do it alone and should have support particularly from CJ Perez, who is back playing 3x3 after previous national team success.

Their statues will be built in Manila if they lead Philippines to Tokyo.

Don't blink or you will miss the highlights

If you don't know it by now, there is a rule you must always obey when watching 3x3. Don't blink or you’ll miss something insane.

Games are quicker than a Kardashian marriage and if you look away then you'll miss a poster, a rude crossover or maybe even a Tissot Buzzer Beater.

You know what else is great about 3x3? Upsets! The short time frame and low score target means this game is more unpredictable than a Kanye West tweet.

There are no guarantees with anything and that could mean hot favorites USA, Latvia or France women's could go home with their Olympic dreams destroyed.

And it also means that an underdog can go all the way if they have a hot streak.

"Anything is possibllllllle!!!" – KG was surely talking about 3x3.

We make sure you're entertained! There are 20 games a day – please pray for Kyle Montgomery's vocal cords – so ensure you take the week off from work, school or chores.

USA means business. They don't want to miss out on the Olympics, where the hoops power believes they belong.

So they've brought out the big guns - Katie Lou Samuelson, Stefanie Dolson, Allisha Gray and Kelsey Plum are household names in the WNBA.

No team in Austria has this type of basketball pedigree but will the USA have chemistry?

3x3 has grown so much in recent years that talent is not merely enough. Players have to be in sync with one another and it remains to be seen if this loaded USA team can mesh.

It will be fascinating to watch how they go.

There are 40 teams combined in men's and women's – and they are fighting for just six tickets. These golden tickets will be harder to find than to the next Coachella.

Three men's and three women's teams will emerge from Graz feeling on top of the world. It will be a painful journey home for the remaining 34 teams.