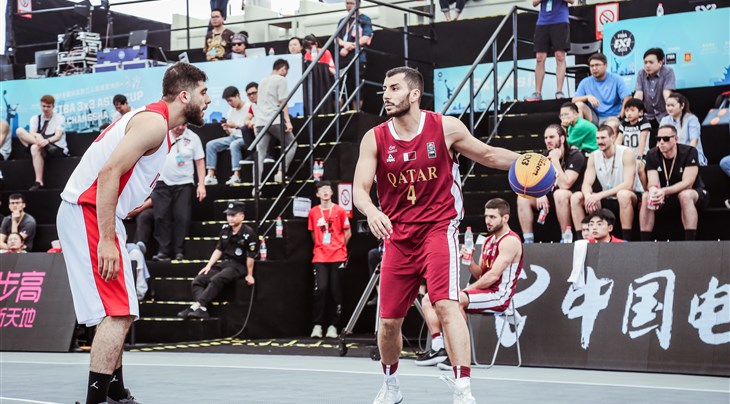 GRAZ (Austria) – 3x3's best are preparing both physically and mentally for the biggest moment of their careers at the upcoming FIBA 3x3 Olympic Qualifying Tournament on May 26-30.

To countdown for this historic moment, we take a look at 10 male players to keep an eye on.

Qatar's No.1 player is one mean baller and a wizard with the Wilson. The 24-year-old has dominated Qatar's domestic league for years and shown glimpses of insane talent on the World Tour but this just might be his breakout.

The 1.90m (6ft 3in) Saad makes sorry defenders sad with his array of sizzling moves that ensures underdog Qatar can't be dismissed in Graz. Speaking of magicians, Antoine Eito makes David Blaine blush with the impossible things he can do on the court.

He'll cross you up like you're in church and this lefty can spot up from anywhere on court. The 1.87cm (6ft 2in) is stronger than Mbappe and can play bully ball at the rack when he's got a full head of steam.

Eito will be leading Les Bleus' charge in Graz and relied upon for France to qualify for the Tokyo Olympics. A hoops power and dominant in women's 3x3, France's men are still looking for their first international title but this is a golden opportunity to make a massive statement.

With Eito steering the ship, France are in good hands for a deep run.

Two years ago feels like 20 in these strange times but in mid-2019 Robbie Hummel wore 3x3's championship belt after leading USA to the FIBA 3x3 World Cup 2019 title with an MVP performance.

The former Minnesota Timberwolf was unstoppable and his impressive physique – he's 2.03m (6ft 8in) but moves so gracefully like a cat on a roof – means he can drain buckets from every spot.

Due to the Covid-19 pandemic, Hummel unfortunately wasn't sighted on the World Tour last year but don't be fooled opponents.

This dude is the ultimate pro and will have been working harder than Rihanna with the obsessive goal of getting USA into the Olympics – where the hoops power feels they belong.

The red, white and blue oozes so much talent. They have Kareem Maddox whose cream always rises to the top and Dominique Jones aka 'Disco Domo' who loves nothing more than putting defenders in a spin cycle.

But it's Hummel who is the lead act in this rock group and if he's humming than USA should book a berth to Tokyo.

We have a bunch of crossover artists in 3x3. But maybe none better than this 5ft 11in (1.81m) 31-year-old South Korean player. Minsu Park doesn't have the biggest biceps or the most ridiculous hangtime. But he can make you dance like your drunk uncle at a family wedding.

Look out Graz, a monsoon is about to hit! If you haven't heard of Joshua Munzon, better get ready. This 1.91m (6ft 3in) smooth mover is becoming a mega star in hoops-mad Philippines after his breakout performances late last year at home and in Doha.

The recent PBA No.1 draft pick has been on a tear and it’s the big stage where his electric game really gets going. He can swish and dish with his eyes closed and if you snooze you lose – this 26-year-old is at the rack and melting down social media.

If Munzon leads Philippines to the promised land then he will instantly become a Filipino legend forever.

Meet 3x3's newest star. Arvin Slagter slaughtered opponents in a MVP performance to lead Amsterdam to their first ever Masters victory at the recent Doha Masters.

Memo to defenders, this sharpshooter can hit twos from the logo like they are free throws. He was a human flame thrower in Doha and if he can replicate that sizzling shooting in Graz then 2021 might really be the Year of the Orange.

This dude loves getting in your grill. Think Rodman could D? You ain't seen nothing yet. With the strength of Genghis Khan, Enkhbat is all D and he should really be a government leader for his ability to impose lockdown so efficiently.

This warrior is the heart and soul of everyone's favorite underdog Mongolia who can complete 3x3's greatest fairy tale by collecting a ticket to Tokyo in Graz.

One thing that is guaranteed, just like Tom Cruise in Color of Money, Dulguun Enkhbat’s hair is perfect – even when he’s hustling for chase down blocks.

Na na na na na. The bat signal is up and that means Karlis Lasmanis aka 'Batman' is about to play superhero once again.

But are his powers waning? The 2m (6ft 7in) dynamo has been hampered by a foot injury although he is confident of being back to his best in the nick of time.

The lethal lefty has been for years one of the very best 3x3 players after so many outstanding performances on the World Tour. He's a legit 3x3 phenom and if anyone deserves to be part of the 21-game’s historic moment in Tokyo it's this spectacular southpaw.

The passionate Lasmanis represents what 3x3 is all about – particularly his selflessness which always shines when he lets fellow superhero Nauris Miezis wear the cape.

If he can lead Latvia to Tokyo, it will be extra special for the 27-year-old whose father was a two-time Olympian as a rower.

They are big shoes to follow but if anyone can do it then it's 3x3’s caped crusader.

Miezis and Lasmanis should start their own Marvel franchise. Maybe a script will be developed after Graz if the partners in crime lead Latvia to glory.

For so long, Miezis was Lasmanis' side-kick – 3x3's ideal 'Robin' – until this cold blooded assassin decided he wanted the lead role.

The 30-year-old might be the baddest of them all after hitting a shot for the ages to lift Riga to their first World Tour Final title after downing Liman.

He can do it all – don't sleep on his dimes - but no one is better when the game is on the line. It's just not fair - the 1.90m (6ft 3in) player can hit Tissot Buzzer Beaters with his eyes closed.

And on such a huge stage, the No.1 3x3 player wants to remind everyone that he holds the crown.

Austrians need a new hero since Schwarzenegger traded muscles for greys. They want a New Action Hero – enter Filip Kramer who is Austria's talisman and has become a 3x3 star in such a short amount of time that it's quite possible the hosts might really have the most.

The 28-year-old is Mr Reliable but his game sprinkles with more flair than Christoph Waltz in Inglourious Basterds.

If Kramer gets going, Austria will have a favorite new Terminator.