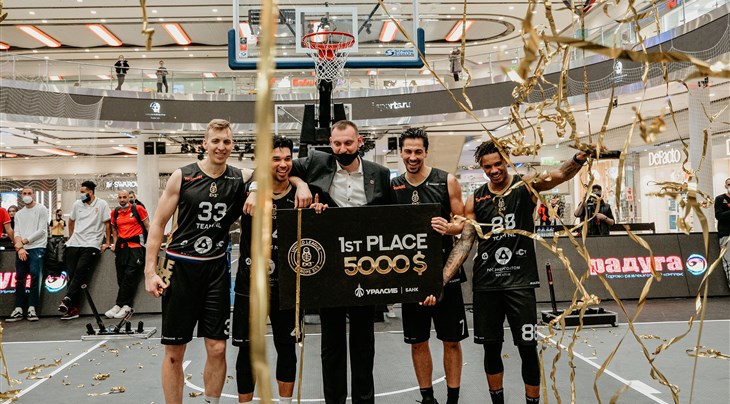 ST PETERSBURG (Russia) - There’s hot and then there is Amsterdam hot.

In just a few days, Amsterdam went from perpetual second to back-to-back winner. At the United League Europe Stop 2, Team NL, consisting of Doha Masters MVP Arvin Slagter and Maksim Kovacevic plus Jessey Voorn and Ross Bekkering won the big check and moved up the standings.

After finishing 5th at Stop 1, the Dutchmen returned to Russia with a lot more confidence. The number 4 seed won 4 of their 5 matches, including a gauntlet in the bracket, defeating Tri zvezdochki, followed by Stop 1 champions, Riga, and finally Novi Sad in a Doha Masters 2021 final rematch.

The final was like watching a Jason Bourne movie; you better keep your eyes locked in or you'll miss the action. Team NL hit six 2-pointers to account for 12 of their first 13 points, never trailing and leaving the announcers losing their voices. Dusan Bulut and the rest of Novi Sad were left trying to hold on the best that they could.

It was another step in the right direction for Novi Sad. Following a 6th place finish at Stop 1, Dusan Bulut was back to making impossible shots and giving us plenty of content for the gram. The man has been making dream shots and nightmares for his opponents for years.

The more games you watch, the less you understand how he does this things 🤷‍♂️😨 #ULE3x3 pic.twitter.com/9tC30yTCuU

Team NL's Jessey Voorn earned named MVP honors for Stop 2, burning the net in the finals and providing great defense against the world’s best 3x3 players. We hope to see the same on the World Tour in the near future.

Play of the Day

Arvin Slagter, you stop that right now. You may have seen that play on House of Highlights and all over IG.

Stop 3 will take place once again in St. Petersburg, Russia at the TRC "Peter Rainbow" at 14 Cosmonauts Ave. The season finale will be held in a unique location - the music and drama theater "BUFF" on April 26.

The winners of the United League Europe 3x3 will qualify for the FIBA 3x3 World Tour. The team that takes second place has an opportunity to participate in FIBA 3x3 Challenger. The events to which the teams will qualify will be announced at a later stage.