Spots for FIBA 3x3 U17 Europe Cup heat up in qualifier 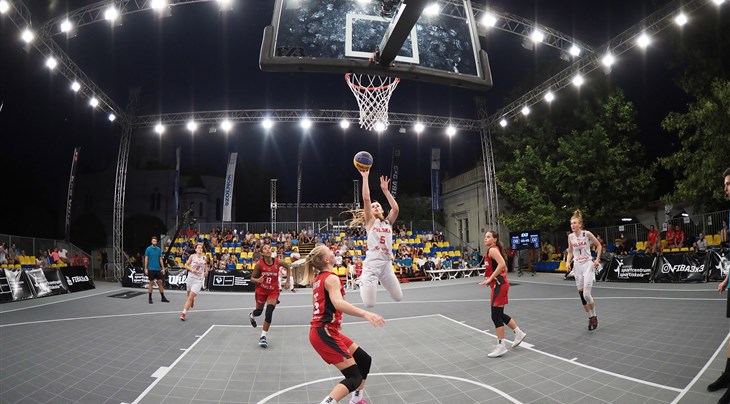 With youngsters no doubt pumped up after watching 3x3's incredible Olympic debut, this promises to be a breakout for future stars who may well be dreaming of competing in Paris 2024.

The sixth edition of this competition promises to be a career building block for players with big ambitions and this will be a golden opportunity to shine.

Reigning champs (Lithuania men's and Spain women's) and the best teams in the FIBA world rankings already secured a ticket to Lisbon.

All other teams will have to go through qualification at the qualifier in Szolnok, Hungary, from August 7-8.

There are 12 teams in the men's with six tickets available to Lisbon, while nine spots are up for grabs in the 12-team women's draw.

In the men's, Romania are the top seed and are led by 16-year-old wonder Vlad Cozea, who is 2m (6ft 7in) and has impressed in local competitions.

Their main threats are likely to be 2nd seed Slovenia and 3rd seed France who will show off explosive 16-year-old Rudy Ekwakwe Priso.

The women's draw is loaded and headlined by No.3 ranked France stocked with talent including in-form 17-year-old Amali Montout who has starred in domestic competitions.

They deserve favoritism but should be challenged by 2nd seed Germany and 3rd seed Netherlands. German sensation Lina Falk comes in hot and could emerge as a star of the competition if she can lead her country to qualification.

Both categories will be played in a round robin format with four pools. In the men's, the pool winners qualify directly to Lisbon while the two 2nd-placed teams of each pool advance to an elimination round.

The winners of these elimination games qualify for the last two spots at the FIBA 3x3 U17 Europe Cup 2021.

In the women's category, the top two of each pool directly qualify to Lisbon while the 3rd-placed teams of each pool will advance to an elimination round with semi-finals and a final game.

The winner of the final receives the final ticket to FIBA 3x3 U17 Europe Cup 2021.

Competition will be fierce as the next generation steps up.