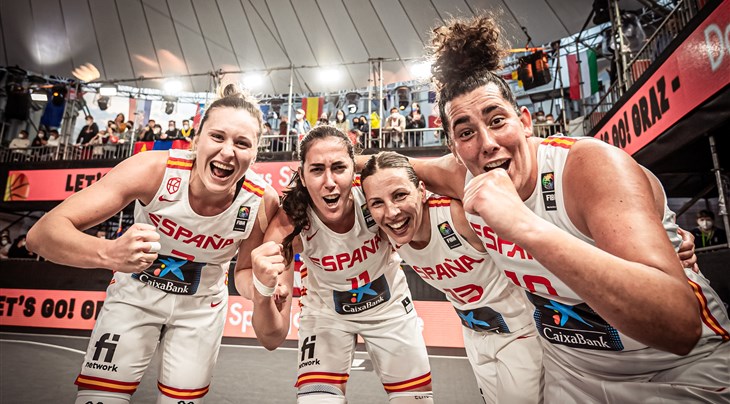 GRAZ (Austria) - After a 23-game slate on Friday, eight teams are now one step closer to their Olympic dreams.

On the women’s side, Japan, Australia, Spain, and Switzerland all qualified for the quarterfinals while France, Slovenia, Brazil and Poland emerged from the men’s side.

Let’s take a closer look at the best of Day 3 of Olympic qualifying.

Spain (Women)
They came in as an early favorite, but still needed to earn their way to the quarterfinals the hard way. After going 1-1 on Day 1, they turned up the intensity on Day 3, defeating Chinese Taipei and Austria to advance. Sandra Ygueravide came to ball, putting up 20 points over two contests to lead 'La Roja'.

Dominican Republic (Men)
The Dominican Republic didn’t earn a spot in the quarterfinals, but they certainly gave Pool C a run for their money. They knocked off a shorthanded Philippines squad 22-11 before taking down Slovenia in an instant classic. Cesar Reyes went for 14 points, include (5) 2-pointers in the upset of the day.

Stephanie Mawuli (Women)
Japan finished the pool stage a perfect 4-0, much in part to the play of Mawuli. She put up 6 points, 5 highlights, and 4 blocked shots vs. a tough Ukraine side and then went to work against Thailand, leading the team in scoring with 8 points.

Dominique Gentil (Men)
Here's a stat line vs. Qatar that will put a smile on your face. 2/2 from 1-point range, 2/2 from beyond the arc, and 2/2 from the charity stripe. La perfection. France is going to the quarterfinals after a 4-0 run in Pool C thanks to Dominique Gentil aka 'Mr Nice' and his stellar play.

No-look from Ganna Rulyova
Ganna Rulyova says top that! We still have plenty of action to go but we think this shot will be making a top-10 list or two.

Gašper Ovnik making it look too easy
Slovenia like their fries... with a lot of sauce. That back-to-back no-look over-the-head combo was just sick ridiculous.

The Dominican Republic defeat Slovenia
Coming into the game, the Dominican Republican, already on a roll after defeating the Philippines, went up against heavy favorites Slovenia in the pool stage finale. Cesar Reyes was out there cooking like a Michelin star chef, scoring 14 points and setting the comments section on fire!

Switzerland dominate Italy
We had high hopes for Italy coming into the OQT but when the ball starts bouncing, anything can happen. Marielle Giroud and Evita Herminjard both had double-5s for Switzerland, defeating Italy handily, 21-11. They now enter the quarterfinals alongside Spain from Pool D.

Eight more teams are looking to earn their spot in the FIBA 3x3 OQT quarterfinals. Here are the teams in action: