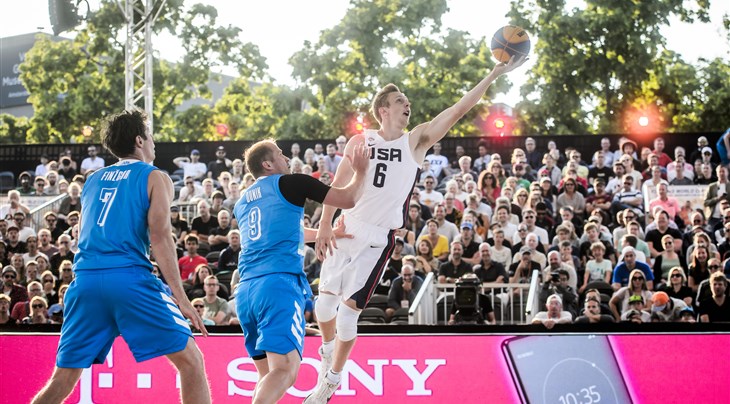 GRAZ (Austria) - When you come from a family of esteemed basketball players like Canyon Barry does (his father Rick is an 8-time NBA All-Star, his brothers Brent, Drew and Jon all played in the League too), there aren't many hardwood accomplishments left to check off the list. But, this May, the former University of Florida sharpshooter will join three other world-class American 3x3 players as they begin their journey to earn the first Olympic gold medal in 3x3 history.

We sat down with Barry to talk about how he and his teammates have been preparing for the qualifying event and what it would mean to earn the gold for the red, white, and blue.

With the 3x3 Olympic qualifiers coming soon, how has training been going and how are you and your teammates preparing?

It’s going really well. We had a good training camp in Orlando where we were able to get together and start playing 3x3 again. With the pandemic, it was a challenge to continue basketball training, but it was good to get the guys back together and get on the same page and map out a game plan for how we are going to get ready for the qualifying tournament. We’re super excited to partner with Red Bull and USA Basketball and have a nice training camp starting May 1 out in LA where we’re going to be able to finalize all the plans and start scouting and putting the final pieces together before Austria.

You’ll be playing with Kareem Maddox, ‘Disco Domo’ Jones, and Robbie Hummel on Team USA. Can you talk about what makes these players great?

It’s a little different than the team we set at the World Cup. We’re combining Princeton and NY Harlem, two of the best teams in the US. It’s been challenging because we haven’t all played together but everyone on the team is a great 3x3 player in their own right so it’s been fun to look at it as a puzzle and try to put the different pieces together. We have Kareem (Maddox) who’s just a dominant defender, so strong, so physical, and can still shoot the ball from outside. He’s a great passer and really anchors our team. You have Robbie (Hummel) who’s a lights-out shooter, great player, tall, strong. If he gets hot, he can single-handedly win you games. We added Dom to the mix, one of the flashiest players on tour. He’s a great ball-handler who excels in pick and roll situations. Thinks the game at a really high level, he’s really smart, and a great shooter. I haven’t been playing 3x3 as long as some of these other guys, but as the youngest, I think I’m pretty athletic, I get to the hole well, I’m a good one on one player, and I can knock it down from long range as well, so I think we have a really potent offensive team. If we shoot the ball well it’s going to be hard for anyone to beat us. We have to commit to playing hard defense, trying to limit teams’ two-pointers and make them settle for tough 1s. We’re going to try to put in sets to put everyone in a position to play to their strengths and be successful. I’m excited to see what this training camp has in store for us, and how we do in Austria.

Though you didn’t play in 2020, did you get a chance to watch the World Tour? What were your impressions, and did you see anyone stand out?

I played in the World Cup (in 2019) and then a few Challengers. Princeton and Harlem already had their rosters set so I wasn’t able to get on one of those teams (in 2020). The World Tour is tough, the competition is hard. Obviously, Liman, Novi Sad, Riga, are all great teams. For us, the most important thing is going to be focusing on controlling what we can control. We haven’t played together as much as these other countries, so we have some ground to make up in that matter, but we’re all super talented basketball players and if we play at the level we are capable of, I think we are the best team in the world. It’s just going to be a matter of how well we play and perform when the big lights are shining.

Has anyone in your basketball famed family ever participated in the Olympics before?

They have not. I would be the first Barry to make it to the Olympics which would be super cool.

What would it feel like to earn a medal and represent your country on the international stage?

It’s one of the highest honors you can have as an athlete, being asked to represent your country at an elite level. One of my most fond basketball memories is winning the 3x3 World Cup in 2019 and having a medal around your neck and the flag-draped around your shoulders. You climb that mountain with your teammates, and we were able to positively represent the country you love. Now to do that on an even bigger stage at the Olympics, which is the pinnacle of athletics for the world, having that potential opportunity is huge, it’s humbling, and it gives you a goal that you strive and train hard every day to try to attain. Barry and the rest of Team USA will look to qualify, May 26-30 from Graz, Austria. They will start in Pool B alongside Lithuania, Belgium, South Korea, and Kazakhstan.