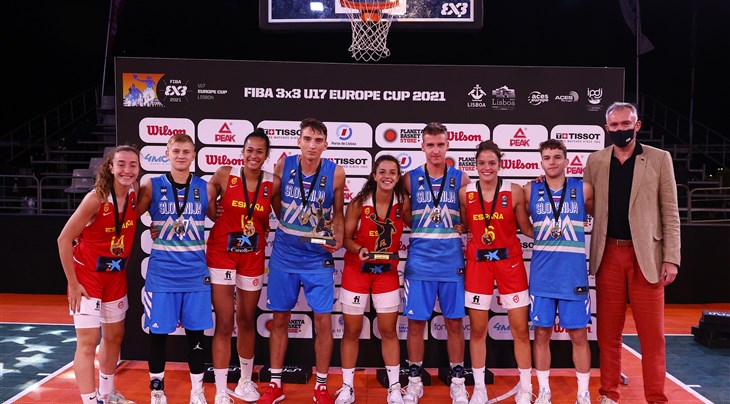 Slovenia won their first 3x3 title in four years (FIBA 3x3 U23 Nations League 2017) after a resilient comeback win in the final against Ukraine (19-14). The Slovenian rising star Crt Cabrilo was named MVP after leading all scorers in Portugal, including a game-high 8 points in the final.

The speedy 5ft 10in. (1.80m) was joined on the team of the tournament by Ukrainian sharpshooter Rostyslav Kabanov and the high-flying Robert Sagodi, who ranked second in scoring and led Hungary to the bronze medal against the Portuguese hosts.

Just one week after winning the FIBA 3x3 Europe Cup, Spain won another gold medal in the women’s category. In a rematch of the 2019 final, Spain retained their title against Germany, in convincing fashion (15-7).

Both winners were awarded their medals by FIBA Executive Director Europe Kamil Novak.

The 16-year-old Carla Brito had a game-high 5 points in the final and took home the MVP trophy. The tournament top scorer Lina Falk (Germany) as well as the third leading scorer Katsiaryna Novik, who broke a pair of ankles in her bronze-medal campaign for Belarus.

Wilson is the Global Ball Partner, Peak was the FIBA 3x3 U17 Europe Cup 2021 Apparel Partner and Tissot the Official Timekeeper of FIBA 3x3.