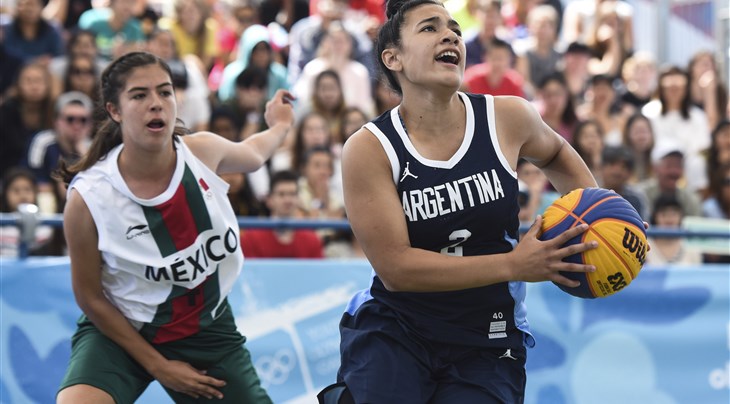 MIAMI (USA) - History will be made on November 12-14 with the first-ever FIBA 3x3 AmeriCup and the talent level will be sky high in the women's category.

To get you even more hyped, let's look at seven must watch female players:

The 20-year-old will be one of the brightest talents in Miami with Acevedo having lit up 3x3 in youth tournaments previously such as the Youth Olympic Games 2018 at home in Buenos Aires.

She might not be tall standing just 1.66m (5ft 5in) but the speedy Acevedo has skills like Messi and can handle the Wilson like it's a tennis ball.

If there's going to be a breakout player in Miami, it might just well be Sofia Acevedo who will get an early litmus test when she goes toe-to-toe with the star-studded USA in a Pool B blockbuster.

Simply the highest ranked player in the tournament, the world's 26th player brings a ton of 3x3 IQ to Miami. The 29-year-old is fresh off a second-place finish at the FIBA 3x3 Women's Series Final in Bucharest six weeks ago. She won four Women's Series events in her career and has one of the most impressive footwork in the game.

She is likely coming without her twin Katherine to Miami but has developed a ton of chemistry over the last few years with partners in crime Paige Crozon and Catherine Traer. Don't act surprised if MP makes it to the Team of the Tournament by the end of next week.

The pressure is always on for the USA in hoops and the 3x3 AmeriCup will be no exception. Having claimed Gold at the Tokyo Olympics, this new-look USA women's team will be aiming to continue the winning form.

Burdick, a FIBA 3x3 World Cup 2014 winner, made a splashy comeback this year leading the US to their first-ever Women's Series in Klaipeda, Lithuania. The 28-year-old has great size at 6ft. 3in. (1.90m), is a rebound magnet, can shoot and can dish from the high post. Real ones know that Burdick was dunking in practice in Moscow at the World Cup 2014 so we know she has a little bounce too.

And to all the Brionna Jones fans, we agree this could have been the pick here. What we know for sure is Jones and Burdick in defense will be the biggest wall Miami has seen since Alonzo Mourning.

When you finish 2nd in assists... and 6th in rebounds in the same tournament, you automatically get our attention. That's the kind of stat line the 27-year-old Perez delivered at the FIBA Women's AmeriCup 2021.

And if you think the 5ft. 11in. (1.80m) star can only play full court basketball, then you haven't seen her play at the Pan-American Games in 2019. The versatile Perez finished 5th Lima and has even more expectations in Miami. You've watched the tapes and she definitely likes a good bounce pass. There's a 100% chance she will make a trip or two to our Top 10s during the AmeriCup.

Another player who shined at the FIBA Women's AmeriCup earlier this year (10th overall in scoring). Morton is a mighty mouse at just 5ft. 1in. (1.55m). The 31-year-old will try to do as well as the team who led the Dominican Republic to bronze in 3x3 at the Pan-American Games in 2019.

Morton is quick and strong. She can pass the rock and for a Caribbean, she really really loves a good Eurostep. The 27-year-old has dominated locally in Brazil this year and she'll surely bring that confidence to the big stage in Miami.

If the 4th seed are to upstage the leading contenders, the 6ft. (1.83m) Goncalves will need to make the paint her personal playground. Many have tried, but not many have succeeded in stopping her array of impressive moves down low.

Having represented Brazil in hoops over the years, she's a flat out winner almost every time she steps on the 3x3 court.

Goncalves is hoping that extends to Miami.

No.9 seed Puerto Rico are an underdog but they have an ace up their sleeve - Mari Placido who is capable of winning games single-handedly.

She'll bring the heat to Miami if feeling it from deep, but the 1.83m (6ft) Placido isn't just a walking bucket - she can dish up a dime so perfect that it should be served on a plate.

There will be few more entertaining players at the AmeriCup than Mari Placido.