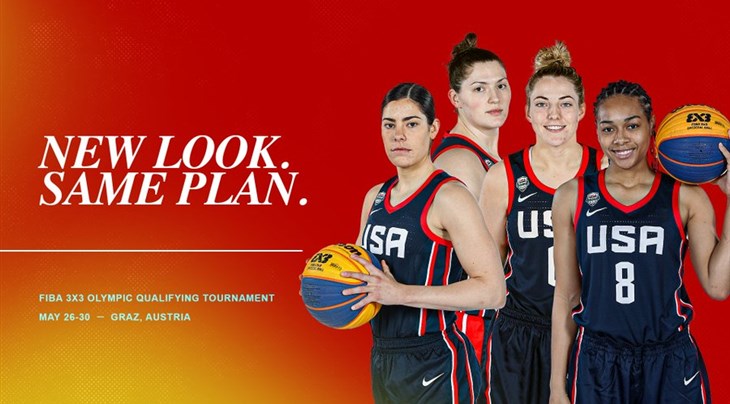 COLORADO SPRINGS (USA) - 3x3 is making its debut this summer at the Olympic Games in Japan, and Team USA is getting ready to go for gold. Before they can represent the red, white, and blue, the women's team will need to qualify.

"I am super excited to be a part of this team," Samuelson said. "It is such an honor to be able to go and compete in this tournament to hopefully qualify for the Olympics. I cannot wait to start playing, and I am excited to be playing 3x3 again. 3x3 has always been extremely fun for me, and I look forward to representing the USA once again," she told USA basketball.

Thus far on the women’s side, China, Mongolia, Romania, and Russia have all qualified for the Olympic games, awarded in November 2019, based on the FIBA 3x3 Federation Ranking.

At the FIBA 3x3 Olympic Qualifying Tournament, Samuelson and co. will need to deliver straight away as they will need to finish Top 2 in a difficult Pool A, which also features reigning FIBA 3x3 European champions France, Germany, Uruguay and Indonesia. If they make it out of the pools, they will have to win two more games (quarter-finals and semi-finals or third-place game) to go to Tokyo. The eighth-and-final Olympic berths for the women will go to the winning teams at a FIBA 3x3 Universality Qualifying Tournament from June 4-6 in Debrecen, Hungary, which will feature six women’s teams from countries that did not have a basketball team at the 2012 or 2016 Olympic Games.

While 2020 proved to be a difficult year for basketball around the world, 2021 is shaping up to be one of the most exciting 3x3 seasons in history.