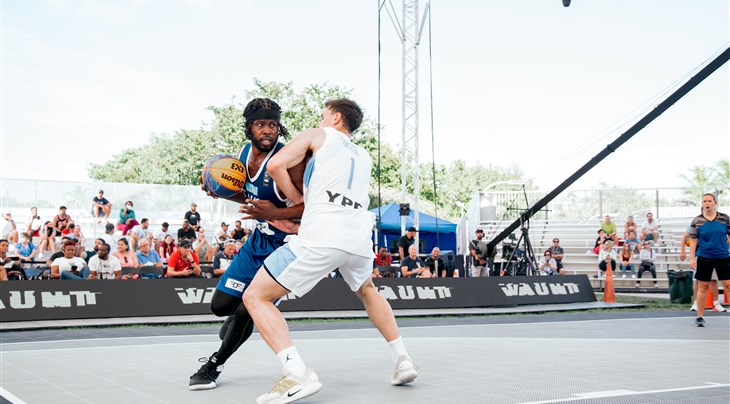 MIAMI (United States) - Saint Lucia made history and USA's women and Canada's men were unstoppable on Day 2 of the first-ever FIBA 3x3 AmeriCup in Miami on November 13, 2021.

Saint Lucia (men) made history by advancing to the quarter-finals of the inaugural 3x3 AmeriCup in their first official 3x3 appearance. They did it by defeating basketball powerhouse Argentina in a nail-biter that was decided in the last 5 seconds of the game.

Gold medal at the Olympics and... 3x3 AmeriCup? The United States women's team was on a roll today and gave no chance to their opponents, defeating Trinidad and Tobago first and Argentina in their second game to finish undefeated and on top of Pool B. Brionna Jones had an impressive 7-point, 7-rebound double-five in the opener.

Canada's men's squad was on fire. After defeating Saint Lucia in their opening game thanks to a Steve Sir heat check (7/7 from outside the arc), they moved on to go past Argentina and top men's Pool B.

YESSSIIIR!!! Steve Sir was unchained in the first game of the day against Saint Lucia: 14 points and 7 /7 from outside the arc.

Bring him to Miami, you get a Heat check 🔥

What a thriller! TJ Fernandez (PUR) came up clutch to nail the Tissot buzzer beater for Puerto Rico over the Dominican Republic.

If you are based in the United States, you can follow the event on livexlive.com/fiba